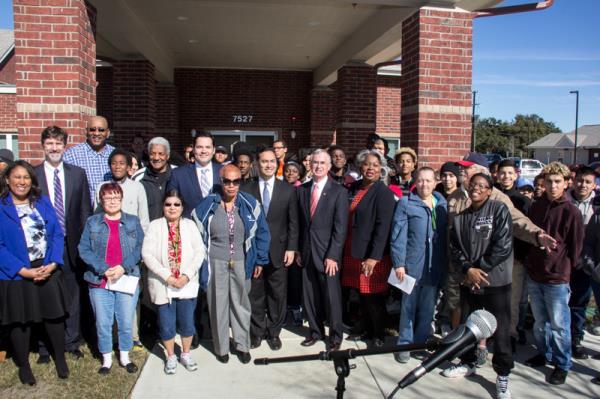 SAN ANTONIO, TX - Congressman Joaquin Castro and Representative Justin Rodriguez joined representatives from the Federal Home Loan Bank of Dallas (FHLB Dallas), Broadway Bank and the George Gervin Youth Center to celebrate the grand opening of the George Gervin Retirement Apartments. The grand opening celebrated the completion of an apartment community for low-income seniors, disabled, and homeless populations, funded in part by a $500,000 Affordable Housing Program (AHP) grant from FHLB Dallas and Broadway Bank. Additional funding for the $7 million project came from the U.S. Department of Housing and Urban Development.

"This new facility is evidence of our commitment to helping the vulnerable population of San Antonio," said Congressman Castro. "I applaud the Federal Home Loan Bank of Dallas, Broadway Bank, and George Gervin Youth Center for being a part of this community-driven initiative to help make affordable housing available to our seniors."

The mission of the George Gervin Youth Center, founded by former San Antonio Spurs Player George Gervin, is to provide a free public charter school to students and community assistance for residents in need. Mr. Gervin, a member of the NBA Hall of Fame, is quite accustomed to being a champion, being the first guard ever to win three titles in a row. Today, he is a champion of the community.

"I've got trophies...but when I see smiles on people's faces and people coming up to me to say, 'thank you for what you're doing in the community'…that's what makes me happy," said Mr. Gervin.

Mr. Gervin said the next project he wants to work on is housing for veterans.

Amenities offered by the George Gervin Retirement Apartments accommodate not only seniors, but also disabled residents. These include wider doors, lower cabinets and stove knobs, as well as expanded parking.

Resident Jane Withers, who injured her back a few years ago, expressed her enjoyment of the amenities offered by the community. "One of my favorite things about living here is that I never have to worry about parking," said Ms. Withers, 53. "If I didn't live here, I'd probably still be living with my parents, who are 77 and 79 years old."

"The grant was vital because we want to enhance the life experience of our seniors," said Ms. Gervin-Hawkins. "This grant allowed us to provide a higher quality of life for the senior population of San Antonio."

Ms. Gervin-Hawkins also attributed the success of this project to George Gervin Youth Center's collaborative relationship with Broadway Bank, with whom Ms. Gervin-Hawkins has been in partnership for more than 20 years.

"What Broadway did was lift us up as a premiere client, and we have always felt that way," she said. "I see them as our bank for life."

"The George Gervin Youth Center team has undertaken some critical projects to help both the youth and seniors in our community — always as good stewards of the funding they receive from FHLB Dallas," said Mr. Rouse. "As a sponsoring FHLB Dallas member, Broadway Bank is pleased to have been able to support the youth center again, confident that the George Gervin Retirement Apartments project would be completed successfully and serving our community well."

Greg Hettrick, first vice president and director of Community Investment at FHLB Dallas, agrees that the George Gervin Retirement Apartments are an asset to the San Antonio community.

"FHLB Dallas is proud to partner with Broadway Bank in support of the ongoing initiative to make affordable housing available to San Antonio's vulnerable population. We applaud Broadway Bank's efforts to alleviate the housing challenges many seniors often face."

FHLB Dallas, in partnership with its member financial institutions, has awarded more than $7.4 million in AHP grants in 2015 to 32 projects, primarily within its five-state district of Arkansas, Louisiana, Mississippi, New Mexico, and Texas, which will result in 965 new or renovated housing units.

FHLB Dallas annually returns 10 percent of its profits in the form of AHP grants to the communities served by its member institutions. AHP grants fund a variety of projects, including home rehabilitation and modifications for low-income, elderly, and special needs residents; down payment and closing cost assistance for qualified first-time homebuyers; and the construction of low-income, multifamily rental communities and single-family homes. In 2015, Texas was awarded more than $2.3 million for 265 housing units.