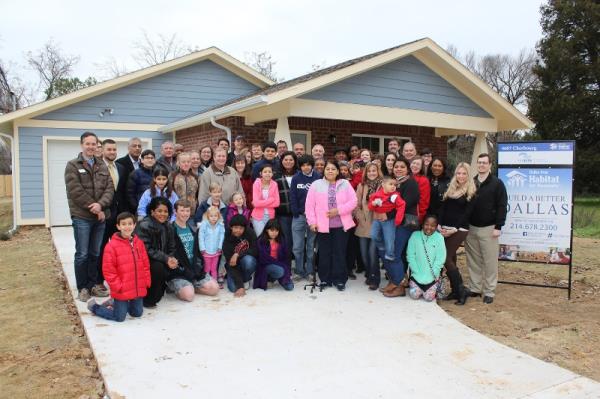 DALLAS, TX - Since 1870, an area of southeast Dallas has welcomed those seeking shelter and a new start. The Joppa neighborhood, one of three remaining Freedman's communities in Texas, lived up to the origins of its Biblical name Saturday: it gave one family a "new beginning" in a house built by Dallas Area Habitat for Humanity and the Federal Home Loan Bank of Dallas (FHLB Dallas).

The new home at 4607 Cherbourg Street was dedicated Saturday in a ceremony honoring the new homeowner, Gloria Gonzalez and her children, and the more than 130 FHLB Dallas employees who joined with them over 12 weeks to build the residence.

FHLB Dallas sponsored the project, begun in September 2015, to give back to the community and to recognize the 25th anniversary of its Affordable Housing Program (AHP).

Ms. Gonzalez, who works as a medical assistant, said she is thrilled to be able to provide a home for her five children, who range in age from 11 to 15.

"I wanted to show my kids that it's possible to have something to show for your hard work," she said. "Now they are looking forward to having their own rooms!"

One of those working alongside Ms. Gonzalez was Kwasi Satcher, IT Application Security manager at FHLB Dallas.

"Being able to help build a house and actually meet and work with Gloria was a humbling experience, and it gave me such a great feeling to be able to help her," Mr. Satcher said. "I am familiar with that area, so to be able to bring some revitalization to that section of southern Dallas was all the motivation I needed."

"There's no downside to volunteering for Habitat. It is a chance to contribute to the needs of affordable housing and to work together with fellow employees toward a goal that doesn't translate into a paycheck," Mr. Moon said. "It's just a great way to serve others. It was an honor to be able to help Gloria."

Dallas Area Habitat for Humanity CEO Bill Hall expressed appreciation for the partnership, which gave the Gonzalez's a new home.

"We are excited that FHLB Dallas is celebrating the 25th anniversary of its Affordable Housing Program with Dallas Area Habitat for Humanity," Mr. Hall said. "They have a long history of connecting financing with community needs, and this is just one more example of how they meet that mission."

FHLB Dallas is one of 11 member-owned district Banks in the FHLB System, created by Congress in 1932 to support housing and community development. Funding for these mission-centered initiatives comes, in part, from grants to FHLB Dallas members through the AHP, which is funded solely from FHLB Dallas' annual profits.

"This project was a Bank-wide effort as we joined together with Dallas Area Habitat for Humanity to build a home in our community," said FHLB Dallas President and CEO Sanjay Bhasin. "We are pleased to contribute in this way, which is at the heart of what we do."

Since the inception of the AHP in 1990, FHLB Dallas has invested more than $237 million to assist more than 44,000 families, primarily across its five-state District of Arkansas, New Mexico, Mississippi, Louisiana, and Texas.

"We were honored to be on the ground, supporting the work of Dallas Area Habitat for Humanity," said Bre Chapman, executive vice president and chief administrative officer at FHLB Dallas. "Our fantastic team of employees so often works behind the scenes to support our members and their communities. This gave them a chance to bring their generosity and can-do spirit to our area and help Ms. Gonzalez give her family a home of their own."