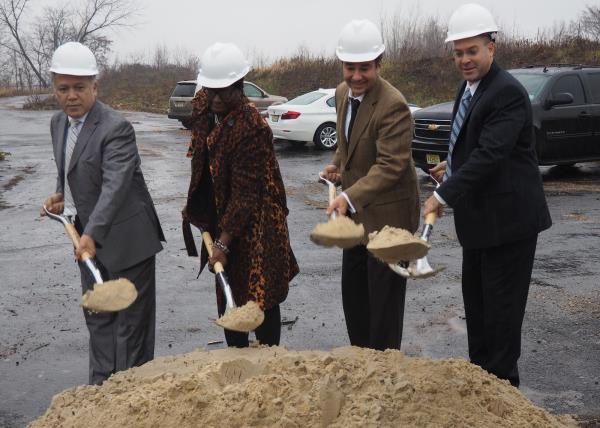 PATERSON, NJ - Paterson Mayor Jose "Joey" Torres Thursday scooped up a shovel full of dirt from a Jasper Drive site above the Great Falls, ceremonially kicking off construction of 156 luxury apartments here.  The community, called Vistas at Great Falls, is a significant step in the renewal of this section of Paterson, said the mayor.

"Major investments such as this one are important to Paterson's neighborhood revitalization plan," said Mayor Torres.  "The construction of affordable and market-rate homes is ideal, not just because it's a significant part of our Great Falls Historical District, but because it spurs movement and a greater economic climate for the neighborhood and the city."

Guests, including city and county officials, crowded under a tent in the rain to kick off the new community, being built by Greentree Development Group, an experienced builder from Lakewood, N.J.

Division President David Gunia said new homes, tot lots, basketball courts and other amenities will rise on a parcel that has stood vacant for eight years. Gunia said his company was pleased to be part of Paterson's growth, adding that the company had searched for just the right place to get involved with the city's renovation.

"This is the kind of project Greentree specializes in," said Gunia. "We've looked closely at this space and the plans for Paterson's future, and we believe this community will be one that will make Paterson proud."

Gunia thanked the mayor and city officials for working with Greentree on the plans for the new community. He said the company was eager to get started.

The mayor said city officials were excited about Greentree's involvement. Saying the timing of the project was just right, Torres said the new community would add another dimension to the city's housing offerings. He said the gated community and amenities were similar to what people could find in the suburbs.

Torres added that Greentree's proposal was one of several, and was the best match to the city's needs.

"This parcel was sought after by many developers," said the mayor. "It was the right offer and the right commitment. Everybody wanted a piece of this rock."

Gunia said he was confident about the Vista's success because the economy is different today than it was eight years ago, when a previous developer failed at the site. Gunia cited the establishment of Great Falls National Park, the creation of the Great Falls Redevelopment Area, the convenience of the location and beautiful setting as reasons that people will look to live here. In addition to overlooking Paterson and the Passaic River, and being amid the surrounding historical district, the community will have the Manhattan skyline as a backdrop. Residents will be able to hear the quiet roar of the Great Falls.

Expected to open this summer, Vistas at Great Falls will offer 156 one-, two- and three-bedroom market-rate homes that will include luxury touches that will make them desirable. Those living here will have a clubhouse that will include "flex-space" and a fitness center.

Among the 13 buildings, each with 12 homes, will be a tot lot, half-court basketball and walking paths. The community will be gated for additional security, and designed to reflect the historical styles of the Great Falls neighborhood.

The Great Falls Redevelopment Area includes revitalization of the Hinchcliffe Stadium, which is next to Vistas, a park, restaurants, outdoor amphitheater and walking paths by the river.

"Greentree works closely with cities to help them realize their visions while providing beautiful places to live, work and play," said Gunia. "We're very excited to take such an important role in helping Paterson reimagine itself for the 21st Century."