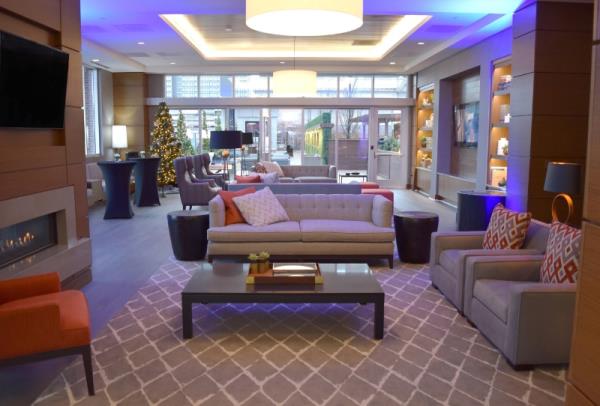 KANSAS CITY, MO - The Cordish Companies and the Kansas City Power & Light District officially celebrated the opening of One Light Luxury Apartments, with a Grand Opening extravaganza featuring remarks by the Cordish Family, the U.S. Department of Housing & Urban Development and Mayor Sly James.  Entertainment at the event was provided by the nationally renowned local performance art group Quixotic, and hors-d'oeuvres and beverages were provided by a variety of Power & Light District dining establishments.

"One Light is a shining example of The Cordish Companies' commitment to quality and delivering best-in-class, public-private developments," said Mayor Sly James. "The Cordish Companies' Power & Light District, and now One Light, have played a pivotal role in the rebirth of downtown Kansas City. With the streetcar, Two Light Luxury Apartments and the convention hotel on the immediate horizon, the future of downtown Kansas City truly is bright."

Since the opening of the eight city block Power & Light District, downtown Kansas City has garnered national attention for its urban renaissance. The transformation has included more than $10 billion in public and private development over the last ten years, with more than 3,000 new apartment units and 1,900 hotel keys in development, and a streetcar line nearing completion. The Power & Light District is the most visited destination in the state of Missouri with over 9 million visitors per year.

"We are incredibly proud to have played a role in the renaissance of downtown Kansas City, and to have partnered with Mayor James and the City," said Blake Cordish, Vice President of The Cordish Companies. "We designed and developed One Light with the goal that it would be on par with the best apartment buildings in the country, whether in New York, Chicago or San Francisco. We believe that is what Kansas City deserves, and we are proud to say that is what we have delivered."

The 307-unit luxury apartment tower in downtown Kansas City, Missouri is downtown's first new construction, high-rise apartment tower building in 50 years, and one of the most luxurious, amenity-rich apartment communities in the country. Since the start of construction in May of 2014, One Light has enjoyed unprecedented interest, and opens with more than 80 percent of its apartments leased. Based on the tremendous demand for penthouse units, One Light added a second penthouse floor midway through construction.

"Our goal in developing One Light was to offer our residents all the luxury and amenities of a resort lifestyle without having to sacrifice the convenience, energy and excitement of a vibrant downtown," said Nick Benjamin, Executive Director of the Kansas City Power & Light District and Director of Multifamily Development for The Cordish Companies. "Our residents will have year-round access to a rooftop pool and bar, a resident -sommelier and room service from more than a dozen downtown restaurants while at the same time living steps away from a grocery store, a full service fitness center, downtown's arenas and performing arts halls, the KC Streetcar, KC Live! and the central business district. We believe this is what the future of urban living looks like—everything for everyone, all in one place."

One Light is the first of four luxury apartments The Cordish Companies will build in downtown Kansas City. Each will feature a similar amenity and entertainment-rich lifestyle, a calling card of all of The Cordish Companies' projects in the gaming, hospitality, urban development and multifamily spaces.