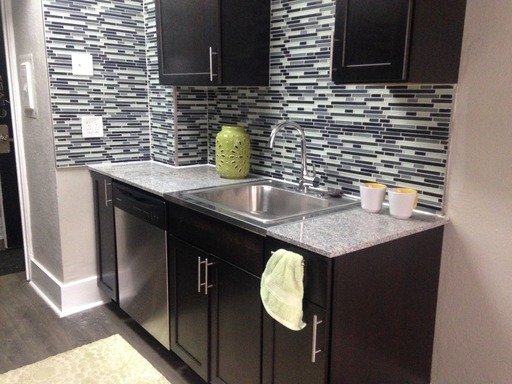 PITTSBURGH, PA - Just a year after acquiring a dilapidated apartment complex in at 2123 Shady Avenue in Squirrel Hill, Dormont-based Nexus Real Estate has turned it into a thriving community focused on sustainability and safety. Now called The Square at Squirrel Hill, the 47-unit property boasts modern amenities and an energy-efficient infrastructure.

"We wanted to respect the original architecture of this century-old property, but condition was so poor that there were features of the building that were actually life-threatening," Craig Falk, project manager in charge of construction, said. "We're thrilled to have brought new life to a structure that was left to ruin."

Safety came first at The Square. Decrepit fire escapes required nearly $50,000 in repairs to cease being threats in and of themselves. Nexus Real Estate removed an unstable chimney that was on the verge of collapse. Construction crews also replaced limestone siding that was falling in the courtyard.

Next up was modernization. All units were equipped with updated smoke detectors and fire alarms. Energy-efficient plumbing and electrical fixtures replaced outdated installations. Nexus replaced dated condensing units to ensure efficiency of the central air conditioning that is provided in each unit. New solar screens reduce heating costs for the residents this winter as well as cooling costs in the summer.

The massive front courtyard that looks onto Shady Avenue is now professionally landscaped on a regular basis, creating more usable outdoor space for residents than the once-overgrown lawn afforded. Constructed from Pittsburgh-forged steel, the modern shade structures in the courtyard are a tribute to the city's industrial past. The rear courtyard is now a livable area with all decrepit concrete and falling fencing cleared.

Transportation is easier for residents since the property became The Square. Nexus added parking spaces available by lease. The bike racks installed at the community and the plans to lease several spaces to car sharing service Zipcar facilitate transportation for residents without cars.

"With all the upgrades and amenities, we're attracting residents whose interests in community and respect for the environment align with ours," Falk said.