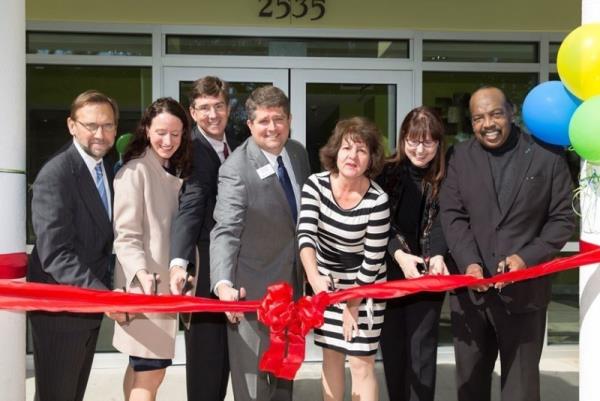 NEW ORLEANS, LA - Dignitaries, developers, and residents celebrated the grand opening today of The Deaconess apartments at 2535 Esplanade Avenue in New Orleans. Formerly the Bethany Nursing Home, the renovated, 40-unit complex was awarded a $400,000 Affordable Housing Program (AHP) grant in 2014 from First NBC Bank and the Federal Home Loan Bank of Dallas (FHLB Dallas). The funds were used for the building's rehabilitation and renovation.

"First NBC Bank is proud to be a part of this worthwhile project that provides much-needed affordable housing opportunities," said Brad Calloway, executive vice president of First NBC Bank. "With support from FHLB Dallas, 40 special-needs and homeless citizens of New Orleans will have places to call home."

Gulf Coast Housing Partnership (GCHP) oversaw construction and development of the $7.4 million affordable housing project, where residents have begun to move in to the 20 permanent housing units and 20 affordable rental units.

First named the Bethany Home, the building was opened in 1890 by the Deaconess Society of New Orleans to create safe housing for those in need.

"Gulf Coast Housing Partnership is happy to celebrate, with all of its partners, the completion of this project and the grand opening of The Deaconess," said Kathy Laborde, president and CEO of GCHP. "We would not have been able to dedicate this high-quality, energy-efficient, and historic renovation of this once-blighted building today without the unwavering support of so many. We celebrate, at this time of Thanksgiving, on behalf of everyone who will call this building a home."

An August 2015 preliminary report from the nonprofit "HousingNOLA" cited the "2013 American Community Survey" showing 37 percent (29,271) of New Orleans households paid more than half of their monthly incomes in housing costs. Nationally, 26 percent (10,384,411) of households were 'severely cost-burdened,' spending more than half a month's wages for housing.

"This kind of burden hits low-income, special-needs households very hard," said Greg Hettrick, vice president and director of Community Investment at FHLB Dallas. "The AHP is one grant program from FHLB Dallas that helps support this vulnerable population, as well as the homeless. We are honored to contribute to improving the quality of life for these individuals."

In 2015, FHLB Dallas awarded $7.4 million in AHP grants to 32 projects that will result in 965 new or renovated housing units. Louisiana received $919,227 for the construction or renovation of 157 units.