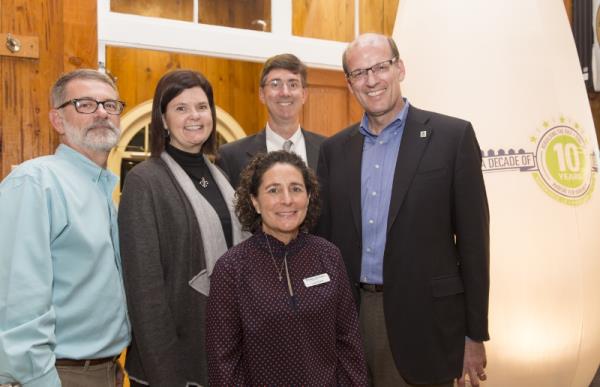 MANDEVILLE, LA - Habitat for Humanity International celebrated a milestone this week by doing what it does best:  it built houses — four of them, this time on F Street in Covington, Louisiana. The "Decade of Dedication Build," hosted by Habitat for Humanity St. Tammany West, recognized the investment from the Federal Home Loan Bank of Dallas (FHLB Dallas) and the community of partners who have helped rebuild the Gulf Coast region after Hurricanes Katrina and Rita.

In the decade since, FHLB Dallas has awarded more than $12.8 million in Affordable Housing Program (AHP) grants to 109 projects, developing more than 1,500 homes in Louisiana, Mississippi, and Texas.

"The dollars from FHLB Dallas are critical to what we do," said Jeff St. Romain, president and CEO of Habitat for Humanity St. Tammany West (HFHSTW). "When we build a home, we are focusing on the children of the homeowners. When those kids go on to college and get good jobs, we are breaking the inter-generational cycle of poverty, and that would not be possible without partners like FHLB Dallas."

HFHSTW was the first Habitat affiliate in Louisiana when it opened in 1981. To date, the organization has built 245 homes, and soon will complete its 246th. Mr. St. Romain also credited its banking relationship with Home Bank, an FHLB Dallas member, for supporting the Habitat affiliate. "The entire Home Bank team has been tremendous, with special thanks to Mary Hopkins, vice president and controller at Home Bank."

Pat Brister, president of St. Tammany Parish, acknowledged the partnerships that have helped the hard-hit area.

"St. Tammany Parish has made tremendous progress over the last 10 years through innovation and sheer determination," said Ms. Brister, who also serves on FHLB Dallas' Board of Directors. "We thank our St. Tammany Habitat affiliates, FHLB Dallas, and its members for their commitment to this community."

Whitney Bank is one of more than 30 FHLB Dallas member institutions participating in Gulf Coast-area AHP projects since 2005. In that time, the New Orleans-based bank has been awarded more than $2.9 million in 16 AHP grants that resulted in 294 Habitat housing units.

"We are delighted to have had the opportunity to work with the Federal Home Loan Bank of Dallas and Habitat for Humanity over the past decade," said Sunada Pool Brookins, vice president and director of CRA & Community Affairs at Whitney Bank. "By providing affordable homeownership opportunities, they have made a difference in the lives of hundreds of families."

In 2015, FHLB Dallas awarded $7.4 million in AHP grants within its District to 32 projects that will result in 965 new or renovated housing units. Louisiana received $919,227 in 2015 for the construction or renovation of 157 units.

Greg Hettrick, vice president and director of Community Investment, praised the hard work of Habitat for its on-the-ground service to the Gulf Coast.

"FHLB Dallas is gratified to support homebuyers in the building of new lives," he said. "We applaud the great work of all the Gulf Coast Habitat for Humanity affiliates and their volunteers. Their extraordinary efforts have helped bring this area back from an unprecedented catastrophe."