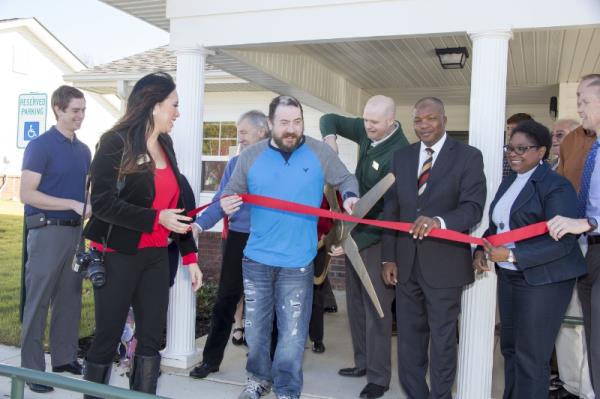 LITTLE ROCK, AR - The 14-unit Harold Court independent-living apartments were dedicated in a grand-opening ceremony and open house. Developed by Easter Seals Arkansas, the complex for physically and developmentally disabled adults was awarded a $98,000 Affordable Housing Program (AHP) grant from Bank of the Ozarks and the Federal Home Loan Bank of Dallas (FHLB Dallas). The funds were used for necessary amenities including sprinkler systems and fencing.

Jackie Gorton, the mother of a Harold Court resident, said, "Harold Court is the best thing to happen to us. It has allowed my daughter to live independently because of the 24-hour adult supervision Harold Court provides."

Located at 1401 Charlotte Drive in Little Rock, Arkansas, Harold Court opened to residents in May. It is adjacent to two other Easter Seals' campuses, Wilson Court I and Wilson Court II.

AHP grants are available annually through FHLB Dallas member institutions, like Bank of the Ozarks, to assist in the development of affordable owner-occupied and rental housing for very low- to moderate-income households located across FHLB Dallas' five-state District of Arkansas, Louisiana, Mississippi, New Mexico, and Texas.

Easter Seals Arkansas CEO Elaine Eubank said various capital sources made this $1.7 million development a reality, including a HUD Section 811 grant that the organization applied for in 2011. "You can't have a project without funding," she said. "So I'm glad to see this project come to fruition."

Built on land donated to Easter Seals, Harold Court is close to shopping and two blocks from city transportation. Its name honors Harold Rousch, one of the first residents of an Easter Seals property in Little Rock.

"We helped Harold get his first job at a local restaurant," said Mac Bell, development director at Easter Seals Arkansas. "His parents didn't think he could live independently, but we helped prove that he could live on his own."

In 2015, FHLB Dallas awarded $7.4 million in AHP grants to 32 projects that will result in 965 new or renovated housing units. Arkansas received $1.1 million for the construction or renovation of 163 units.

"There is a tremendous need at the community level for affordable housing, like Harold Court," said Bruce Hatton, Affordable Housing Program manager at FHLB Dallas. "FHLB Dallas is honored to contribute, through Bank of the Ozarks, to improving the quality of life for residents of Little Rock who may have nowhere else to turn."