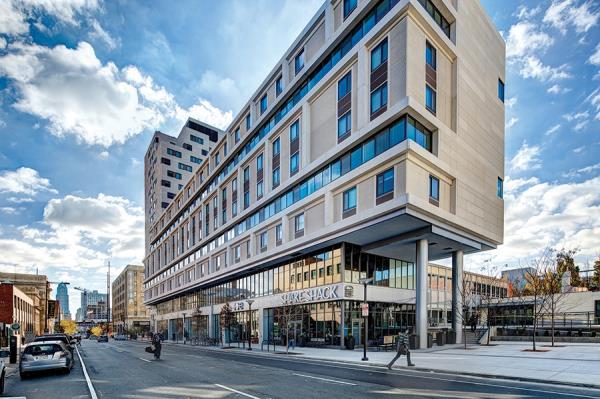 AUSTIN, TX - American Campus Communities, the largest owner, manager and developer of high-quality student housing properties in the U.S., was recently presented with two awards from the National Association of Home Builders (NAHB) honoring Chestnut Square, a student housing community on the campus of Drexel University in Philadelphia, PA.

Chestnut Square was named the 2015 Best Mixed-Use Community and the 2015 Best Student Housing Rental Apartment Community as a part of the prestigious Pillars of the Industry Awards distributed by NAHB. As stated on the NAHB website, the Pillars awards are held in high esteem by top-level multifamily development companies, management firms and experts in the field. The annual competition is judged by a jury of knowledgeable peers, each having a proven record of success in various facets of the apartment and condo industry.

“Our partnership with Drexel University has yielded three award-winning student housing communities,” said Bill Bayless, President and CEO of ACC. “That success is a testament to President Fry’s unparalleled vision for student housing at the University and our shared, unrelenting commitment to student success.”

The Drexel University-American Campus Communities partnership came together as a part of President John Fry’s vision to create a vibrant gateway to Drexel and University City with the development of Chestnut Square. The 861-bed development has been recognized on several platforms for its national excellence.

“Chestnut Square helped transform our campus and our neighborhood, and it richly deserves these accolades,” said John A. Fry, Drexel’s president. “American Campus Communities develops and runs great buildings, including three at Drexel, and our partnership with American Campus has allowed us to focus on academic priorities and leave infrastructure investments and challenges to the experts.”

The Drexel University-American Campus partnership includes three projects that expand the University housing capacity by approximately 3,200 beds—including Chestnut Square, The Summit at University City and University Crossings. All projects were funded by American Campus Communities as a part of their American Campus Equity (ACE) program, which provides universities with the option to develop or sell student housing while preserving their debt capacity to fund core infrastructure.