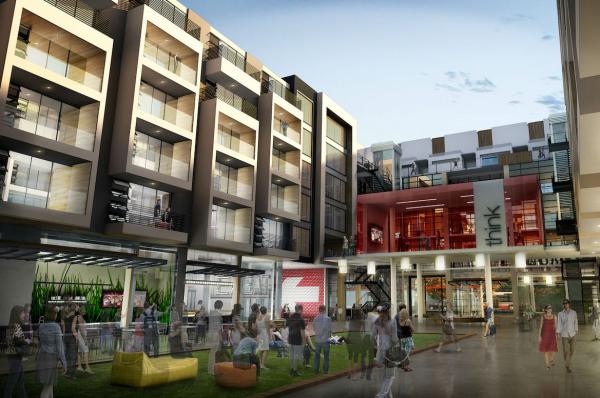 SAN DIEGO, CA - Lowe Enterprises, LaSalle Investment Management and I.D.E.A. Partners commemorated the start of construction of IDEA1 with a groundbreaking celebration attended by community members, business, civic, academic and cultural leaders, technology and creative industry entrepreneurs and others who are engaged in the evolution of San Diego’s innovation corridor in the Upper East Village known as the I.D.E.A. District.

The $90 million project is a pivotal development in the area bringing a mix of apartments, live/work lofts, restaurant, retail, and creative office space built around The Hub, an open communal gathering space. IDEA1 occupies a full city block, bounded by E, F, Park and 13th Streets where construction barricades have been erected featuring an original artistic design composed by Visual Asylum and brought to life by students from the City College Graphic Design program, Urban Discovery Academy and the New School of Architecture and Design. Construction on IDEA1 will be in full-swing by mid-November.

“Today’s groundbreaking is a game changer in that San Diego is changing the way communities live, work and interact. It is my hope that the I.D.E.A. District will spark more innovative ideas that will change the world. This is proof that we’re not just a city that makes innovative things, we’re cultivating an ecosystem of innovation for generations to come,” said Mayor Kevin Faulconer.

IDEA1 will be a mid-rise, six-story complex featuring 295 studio, one- and two-bedroom apartments with 25 ground floor live/work lofts and eight luxury penthouse units, all featuring polished concrete floors and top-line appliance packages, and 13,000 square feet of commercial space. Designed by The Miller Hull Partnership, IDEA1 will integrate into the existing neighborhood while enhancing the community character with its approachability, creativity and transparent and colorful design elements. IDEA1 will create a more inviting pedestrian experience in the area, provide new restaurants and retail and communal spaces that will benefit IDEA1 residents and its neighbors. Miller Hull intends to locate its San Diego office in IDEA 1.

“IDEA1 will bring new residents and businesses to the area, particularly those who are engaged in emerging creative technologies and who are drawn to an urban lifestyle. Our team is at the forefront of establishing a strong resident and talent base which is key to moving communities like East Village forward and creating value for all,” said Mike McNerney, senior vice president, Lowe Enterprises.

IDEA1 residents will have abundant spaces to collaborate and exchange ideas as well as to relax and socialize. IDEA1’s many communal features include a clubhouse, roof top pool – designed to look like an urban water tower -- exercise room and event kitchen.

A central feature is The Hub, an interior courtyard envisioned as a flexible events space, adjacent to a café and collaborative environment called the IDEA Box, available to residents and workers as well as accessible from the surrounding streets. Programming for The Hub will include social gatherings, educational offerings, and informal events offering multiple opportunities for creative collisions between community members.

Furthering IDEA1’s appeal is its location within two blocks of two trolley stops, across the street from the New School of Architecture and Design and adjacent to the future East Village Green – a community park slated to start construction next year. It also is one block from Quartyard, the popular outdoor gathering spot offering a variety of entertainment and food options where, following the program, IDEA1 groundbreaking celebrants joined the community in further commemoration of the start of construction of this important contribution to the area.

IDEA1 is one of the first developments in the I.D.E.A. District, a 95-acre sustainable, mixed-use initiative spearheaded by I.D.E.A. Partners Pete Garcia and David Malmuth.

“IDEA1 embodies the spirit and elements that define the I.D.E.A. District – a community designed to enhance a work/play/live life built on the pillars of innovation, design, education, and the arts. These features were established based on multiple community meetings where a plan to build an innovation hub for San Diego was formed,” noted David Malmuth.

The I.D.E.A. District vision is to develop an urban mixed-use district driven by a 21st Century innovation and design jobs cluster, nourished by educational institutions and enriched by the arts.

“With its unique combination of mixed use, transit-oriented design and focus on arts and culture, IDEA1 is designed to meet the needs of the new economy and the future of Downtown San Diego. IDEA1 provides Downtown San Diego with the highly-amenitized, on-demand environment that will attract millennial talent and strengthen our image as an urban center that fosters creativity and innovation. This groundbreaking is a huge step forward for our Downtown and the residents, employees and students who will enjoy East Village for years to come,” said Kris Michell, president and CEO, Downtown San Diego Partnership.