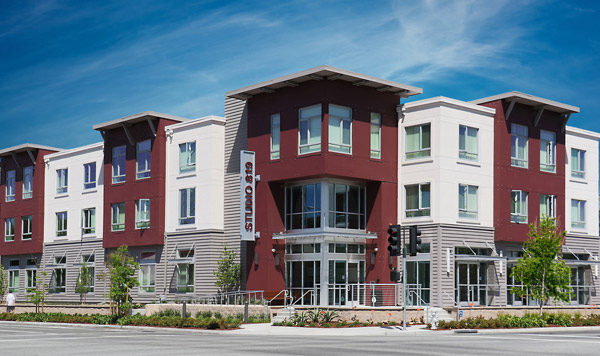 MOUNTAIN VIEW, CA - While Silicon Valley may be booming with new high-tech start-ups and the coveted jobs associated with them, many in the workforce still lack access to affordable housing that they can call home. Partnering with the City of Mountain View, ROEM Corporation and Eden Housing, took the challenge of converting an older community lacking modern amenities into a community that rivals market-rate housing in design and amenities while achieving the highest USGBC LEED rating, LEED-H Platinum Certification.

Working with the project’s designer, national award-winning firm KTGY Architecture + Planning, achieving LEED certification was a top priority for ROEM Corporation from the start of the project. By identifying and integrating multiple durability strategies into the project’s design, it was possible to ensure that the goal of creating a sustainable building would be achieved.  With this vision set in the initial phase, Studio 819 surpassed Title-24 standards by 32% with features that optimized energy performance through insulation, windows, water heating, mechanical, lighting, and appliances.

Awarded the highest amount of points for location and linkages, Studio 819 is ideally situated in downtown Mountain View, Calif. “This central location affords residents short walking distance to many local amenities, such as public transportation, shopping, and other valuable neighborhood resources,” said Robert Emami, CEO and President of ROEM Corporation. “Studio 819 embodies ROEM’s long standing commitment to sustainability in a way that benefits the residents and the surrounding community.”

Studio 819’s large rooftop solar PV system, which consists of 120 solar panels, will help offset some of the energy load and provide a significant amount of energy to the project. In addition, the hot water State Ultra Force water heaters are 96% efficient and Energy Star labeled.

Taking into consideration the drought-stricken reality in which California finds itself, the landscaping at Studio 819 showcases a careful selection of environmentally-sensitive plants with 45% of the plants installed being drought tolerant. No invasive plants or turf were used onsite. Storm water runoff has been engineered to flow directly from the roof into the landscaping with the capacity of accepting storm water from a 10-year storm. This significantly limits the amount of water that flows off-site into the public storm system. With Studio 819 classified as a very high-density community, this ultimately saves open spaces in the area and allows residents to congregate closer to walkable community resources.

To achieve water efficiency, a highly specialized irrigation system specifically designed to meet the needs of a drought tolerant region was installed. The hydro-zoned, centrally-controlled irrigation system will deliver water to only the areas that need it, while also being weather sensitive. It also automatically adjusts the amount of water delivered based on local conditions. Inside the units, low-water consumption interior fixtures were installed.

ROEM has made a long-standing commitment to building smarter and building better by building greener. Studio 819 exemplifies this commitment and is one of many projects in ROEM’s portfolio that has achieved this high standard.

“KTGY is proud to add another LEED Platinum certified project, our third with ROEM, to our portfolio,” said Keith Labus, AIA, LEED AP, and Principal at KTGY. “Studio 819 is an example of both our companies’ continuing commitment to building sustainable communities.”