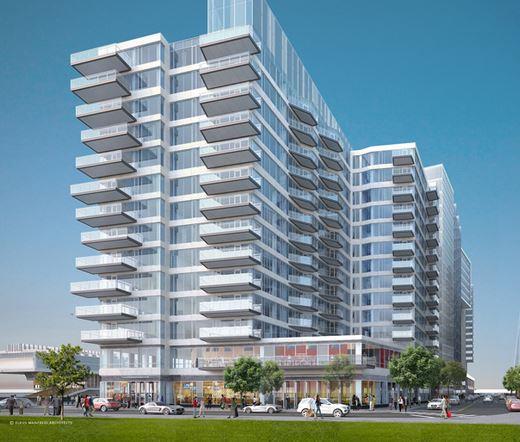 BOSTON, MA - Continuing the momentum at its landmark Fan Pier development, The Fallon Company today broke ground on Fifty Liberty, a 14-story new construction residential tower that will feature sweeping views of Boston’s inner and outer harbors and city skyline, offering residents the best of luxury, waterfront living in an unparalleled location at one of Boston’s most coveted new addresses.

"The groundbreaking of Fifty Liberty represents another milestone in the growth and evolution of Boston's waterfront, and will strengthen our City by bringing jobs and economic development," said Mayor Martin J. Walsh.

Fan Pier, spanning nine city blocks and situated at the epicenter of Boston’s bustling new waterfront, is a modern metropolitan community that embodies all of the conveniences and amenities of a 21st century urban neighborhood, including lush green space, a world-class marina, and a bevy of cultural, dining and retail destinations, in the heart of one of the nation’s most historic cities.

“We look forward to welcoming future residents of Fifty Liberty to the vibrant Fan Pier neighborhood,” said Joe Fallon, President and CEO of The Fallon Company. “Like Twenty Two Liberty, Fifty Liberty offers the sophistication and convenience of city living, including access to the city’s best restaurants, coupled with ample green space and front-door waterfront access as its ultimate amenity. We’re happy with the continued interest in the Fan Pier lifestyle, and all it affords remains so strong.”

Fifty Liberty will feature a staggered façade, featuring waved balconies and terraces as a nod to the building’s waterfront location, and will include a second floor “green roof,” complete with lush landscape architectural elements, adding additional aesthetic interest to its exterior. Designed to maximize views from the majority of units, the building boasts unparalleled 270-degree vistas of Boston’s cityscape, Fan Pier Park, Boston Harbor and Fan Pier Marina from various vantage points. The generously-sized condominiums will be available in several configurations, from studio pied-à-terres to 3+ bedroom homes, with high-end details and an array of luxurious amenities designed to surpass even the most refined expectations.

Fifty Liberty’s luxury homes will be impeccably styled with quality materials and finishes throughout, and residents will enjoy the best of luxury from their first steps into the intimate lobby, complete with fireplace and welcoming seating areas. The vibrancy of city living will be available at their fingertips, including 24 hour concierge support, private shuttle service around the city, and private elevator access from the underground garage to each floor. Additionally, the property will offer residents a dedicated 3,500 square foot club room for entertaining, and “Stretch 50,” a private 2,000 square foot indoor/outdoor health and fitness center, featuring best-in-class cardiovascular and weight training equipment.

Additionally, Fifty Liberty will offer its residents front door access to two lush, outdoor areas – the one-acre Fan Pier Park, as well as the Fan Pier Public Green. The homes will also provide easy access to Fan Pier’s world-class, six-acre marina, which offers a variety of berthing options from sailboats to mega yachts, and the 38 mile Boston HarborWalk. Completion of Fifty Liberty is expected in late 2017. Preliminary sales are underway.

Fifty Liberty will be situated within steps of a formidable litany of retail and hospitality ventures on Fan Pier, including Mario Batali’s Babbo Pizzeria e Enoteca, and Committee, a George Aboujaoude restaurant specializing in Mediterranean “meze” fare and hand-crafted cocktails. These two new concepts opened in 2015, and added to Fan Pier’s well-rounded mix of local and national retail concepts, including Empire Asian Restaurant & Lounge, Sam’s and Strega Waterfront, along with B.Good, Bright Horizons Family Solutions, Leader Bank and Starbucks Coffee Company. Additional dining and retail locations are also planned for the site, and for the ground floor of Fifty Liberty.

Other conveniences include close proximity to some of Boston’s premier arts and cultural attractions, such as the Institute of Contemporary Art (ICA), Blue Hills Bank Pavilion, and the Boston Children’s Museum. Fan Pier also offers easy access to public transportation, including South Station, a water taxi to Boston Logan Airport and the Financial District, Hubway bikes onsite, and easy access to several highway exchanges.

Design for Fifty Liberty is helmed by Boston-based Elkus Manfredi Architects, an award-winning firm led by Howard F. Elkus and David Manfredi, both fellows of the American Institute of Architects. Established in 1988, Elkus Manfredi's collective wealth of design and planning experience is built across a rich diversity of project and building types, with a diverse portfolio of projects both locally and globally, including Miami World Center, The Shops at Columbus Circle and Sochi Grand Marina. The design firm's understanding of the interplay between connectivity, location, market pressures, sustainability, and other elements is central to how they approach each project and is at the core of The Fallon Company's decision to work with them.