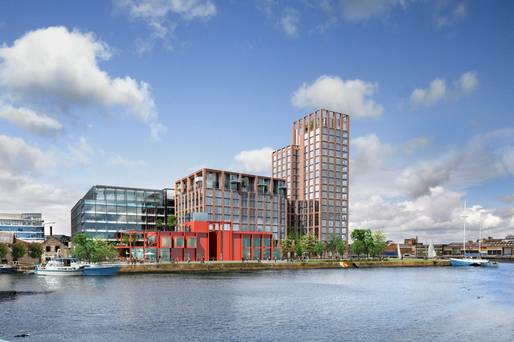 BEVERLY HILLS, CA - Global real estate investment and services firm Kennedy Wilson along with its equity partner, in a joint venture with the National Asset Management Agency, announced that they have secured planning permission for an innovative development on Sir John Rogerson’s Quay in Dublin 2. Extending over 4.8 acres, “Capital Dock” is one of the largest undeveloped sites in Dublin’s central business district and will deliver over 660,000 sq. ft. of new space at this prime waterfront location. The approved plans include 316,000 sq. ft. of office space across three buildings and 204 high-quality multifamily units across an additional three buildings, one of which is a 23 story tower marking the gateway to the city.

Development on the site is expected to begin by December 2015, with the first office buildings available from mid-2017 and the multifamily units completing in early 2018. The site is already substantially remediated and benefits from having the two story basement works already in place, which significantly shortens the construction time. The development, which benefits from water views on both sides, places a significant emphasis on public space with a new 1.5-acre landscaped public park and square, cultural space and a significant retail offering. Costs to complete the development are currently projected to be approximately $225 million, which may be financed through a combination of debt borrowings and equity from Kennedy Wilson, its equity partner, and NAMA.

In 2012, Kennedy Wilson and its equity partner acquired a loan secured by a Class A office building leased to State Street Bank and the adjacent three acre site at Sir Rogerson’s Quay in Dublin, Ireland. At acquisition, the undeveloped three acre site had minimal allocated cost basis. Kennedy Wilson and its equity partner took title to both the building and the adjacent land in 2013 with the site assembly finalized at the end of 2014 following the completion of a joint venture arrangement with NAMA. The building and the development of the adjacent land both represent direct investments of Kennedy Wilson.