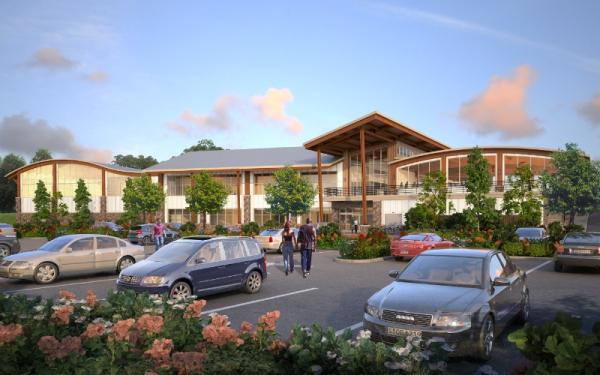 NEW YORK, NY - Related Companies unveiled plans for Tuxedo Farms, located just 35 miles and one hour by train from New York City in the historic town of Tuxedo, N.Y. Tuxedo Farms will offer 1,195 residential opportunities across several distinct neighborhoods, surrounded by pristine views and open space. Ranging from cottages and townhouses to manor and estate homes, residences are expected to be priced from $450,000 to over $1.5 million. One, two and three bedroom rental apartments are also planned. Approximately 800 of the site's 1,250 acres will be preserved open space and additional retail amenities including a grocery store, parks and playgrounds and a vast YMCA will also be developed as part of Tuxedo Farms. Robert A.M. Stern Architects, Cooper Robertson, Hollander Landscape Architects, and James G. Rodgers Architects are just a few of the design partners that have collaborated on this project.

Related Companies, renowned for its place making expertise and experience in master planning of landmark developments throughout the United States such as Hudson Yards and Time Warner Center in New York City, City Place in West Palm Beach and Base Village in Snowmass Colorado, is the master developer for Tuxedo Farms. The vision for the new community will be realized by Related, who will oversee the development of the infrastructure, the landscaping, the YMCA and retail amenities, and by home builders, who will have the opportunity to bulk purchase fully improved home lots. Design guidelines have been crafted to ensure a cohesive and consistent master plan.

"Tuxedo Farms has all the ingredients of a great community: proximity to work, state-of-the-art amenities, nature at your doorstep, and its located in a town that is poised for revitalization at the trailhead of the Hudson Valley," explained Stephen Ross, chairman and founder of Related Companies. "We are thrilled to share this exciting and rare opportunity with home builders, from whom we have already received tremendous interest."

Tuxedo Farms will be anchored by a new, $12 million, 37,000 square foot YMCA, which Related is funding, developing and donating to the local chapter of the YMCA. The YMCA will break ground in the second quarter of 2016.

"At Tuxedo Farms, we are delivering on our vision for a new type of  master planned community that  provides a much needed alternative to the typical neighborhood subdivisions in the New York area, specifically meeting the demands of today's families," noted Andrew Dance, senior vice president at Related Companies and project lead for Tuxedo Farms. "Related is also bringing new amenities, retail options and important infrastructure to the area, where we are partnering with the town and with local businesses to further enhance what is already an exceptional community."

This past July, Preston Hollow Capital announced that it had completed $30 million in bond financing for the Tuxedo Farms Local Development Corporation (LDC). The LDC bonds will exclusively fund a new waste water treatment facility for the town of Tuxedo to replace the aging plant, which broke ground in early September of this year. Site work is also underway on the development's spine road and its first four neighborhoods.

Additionally, Related has provided the following support to the town of Tuxedo: a $2 million grant for Downtown Tuxedo beautification; a gift of $2.5 million to the Tuxedo Union Free School District for capital improvements along with a donation of 40 acres of land for future expansion; a $250,000 small business loan fund to seed new ventures in Downtown Tuxedo with an aggregate total of $4 million; and restoration of the Tuxedo Rail Station, to name a few.