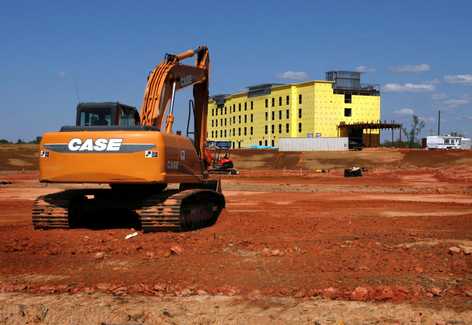 NEW YORK, NY - New construction starts in August dropped 11% to a seasonally adjusted annual rate of $554.5 billion, according to Dodge Data & Analytics.  Declines were reported for each of construction's three main sectors – nonresidential building and housing pulled back from their improved July pace, while nonbuilding construction continued to recede from the heightened performance witnessed earlier in 2015.  During the first eight months of 2015, total construction starts on an unadjusted basis were $446.1 billion, up 15% from the same period a year ago.  If the volatile electric utility and gas plant category is excluded, total construction starts during the first eight months of 2015 would be up a more moderate 7% relative to last year.

The August statistics lowered the Dodge Index to 117 (2000=100), down from the 133 reported for both June and July.  "While August construction starts were notably subdued compared to recent months, it's useful to keep in mind that construction starts on a monthly basis will often show an up-and-down pattern, and the year-to-date statistics depict an expansion that's still proceeding," stated Robert A. Murray, chief economist for Dodge Data & Analytics.  "For nonresidential building, the early months of 2015 did show some deceleration for the commercial categories, consistent with the slower pace of economic growth in the first quarter, and manufacturing plant construction is now retreating after the exceptional amount of energy-related plant investment in 2014.  At the same time, market fundamentals for commercial building (namely rents and occupancies) are still positive, and commercial building projects at the planning stage have recently increased.  This suggests that the pace of commercial building starts, while lackluster in August, should soon pick up.  For residential building, the August decline was due to a slower pace for multifamily housing after a particularly strong July, and the upward trend for this sector remains intact.  For nonbuilding construction, highway and bridge starts have slipped from the elevated activity reported earlier in 2015, and at midyear there was uncertainty related to the depleted Highway Trust Fund.  At the end of July, Congress approved $8 billion to shore up the Highway Trust Fund, although there's still some uncertainty as to when Congress will be able to pass a new multiyear federal transportation bill."

Nonresidential building in August dropped 16% to $160.7 billion (annual rate).  The commercial building categories as a group were considerably weaker for the month, sliding 24%.  Hotel construction in August plunged 35%, pausing from the strength of recent months, although August did include the start of a $122 million hotel in New York NY.  Office construction, falling 34%, was down a similar amount in August. The largest office project reported as an August start was a $211 million data center in McCarran NV, while the next largest office projects were each valued at $30 million, including an office building renovation in Brooklyn NY, the initial phase of the Google office campus in Boulder CO, and a 4-story office building in the Dallas TX area.  Stores and warehouses managed to register slight gains in August, rising 3% and 2% respectively.  Store construction was helped by the start of a $65 million outlet center in Berkshire Township OH, while warehouse construction received support from a $100 million distribution center in St. Louis MO.  The manufacturing plant category in August slipped 2%, although the latest month did include the $255 million expansion of the General Motors assembly plant in Roanoke IN.

The institutional building group in August dropped 11%, reflecting declines for the majority of the institutional categories.  Healthcare facility construction fell 28%, retreating from its generally improved activity during the previous four months.  The largest healthcare projects that reached groundbreaking in August were a $55 million healthcare center addition in Ithaca NY, a $53 million hospital addition in Aurora IL, and a $53 million neuroscience center in St. Paul MN.  Other institutional categories with substantial August declines were transportation terminals, down 39%; and amusement and recreational buildings, down 43%.  While the public buildings category fell 14% in August, it did include the start of a $221 million project to restore the Wyoming state capitol building in Cheyenne WY.  On the plus side, the educational facilities category in August advanced 17%, lifted by the start of the $705 million National Bio and Agro-Defense Facility in Manhattan KS, which is a biocontainment laboratory for the Department of Homeland Security that will study diseases affecting the nation's agricultural industry and public health.  The educational facilities category also included groundbreaking for several large high schools, located in Katy TX ($161 million), Beaverton OR ($125 million), and Pflugerville TX ($104 million). The small religious buildings category managed to show a sizable percentage increase in August, rising 42% from its depressed July amount.

Residential building, at $265.5 billion (annual rate), fell 8% in August.  Multifamily housing retreated 23% after climbing 22% in July to its strongest level so far in 2015.  The August pace for multifamily housing was still 21% above the average monthly amount reported during 2014.  There were eight multifamily projects valued each at $100 million or more that reached groundbreaking in August, led by the $530 million multifamily portion of the $550 million Metropolis Residential Towers (phase 2) in Los Angeles CA, a $300 million apartment building on W. 53rd St. in New York NY, and a $290 million residential tower in Boston MA.  At the eight-month point of 2015, the top five metropolitan markets ranked by the dollar volume of multifamily starts were the following -- New York NY, Miami FL, Los Angeles CA, Washington DC, and Boston MA.  Single family housing in August edged up 1%, regaining slight upward momentum after slipping 4% in July.  The August pace for single family housing was 12% higher than the average monthly amount reported during 2014.  By geography, single family housing in August showed a moderate increase for the Northeast, up 8%; while the other four regions were basically flat – the South Atlantic and the West, each up 1%; the Midwest, no change; and the South Central, down 2%.

Nonbuilding construction in August dropped 12% to $128.3 billion (annual rate), declining for the third month in a row.  The public works categories as a group were down 15% in August, slipping to the lowest volume so far in 2015.  Highway and bridge construction (like public works overall) fell 15% in August, and has generally lost momentum since this year's first quarter.  Despite the decline, highway and bridge construction in August did include the start of a $237 million rehabilitation project for the Manhattan exit plaza of the Queens Midtown Tunnel in New York NY.  The "other public works" category (which includes such diverse project types as site work, mass transit, and outdoor sports stadiums) fell 29% in August even with the start of a $155 million soccer stadium in Orlando FL.  The environmental public works categories in August were mixed, with river/harbor development down 16% and water supply systems down 17%, while sewer construction increased 23%.  The electric power and gas plant category in August was unchanged from the previous month.  Large electric power projects that were entered as August starts included a $408 million solar power plant in California and a $323 million wind farm in Minnesota.