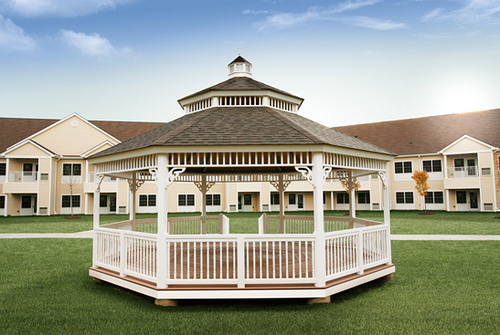 Fox Run is a Lifecare Community available to individuals age 62 or older. The campus is partially wooded with preserved wetlands. Fox Run was established by the United Church Home Society, Inc. (UCHS), a local not-for-profit organization. UCHS has roots in caring for seniors dating back to 1877 and is affiliated with the United Church of Christ denomination. The UCHS mission is to identify opportunities and support ventures that develop community, residential and home based solutions to help people become or remain independent, with an emphasis on serving an aging population.

Fox Run began operating November 1, 2007. There are 180 independent living units comprised of 30 patio homes and 150 apartments in a two-story apartment building with a Health Center and a Community Center. The health center contains 50 skilled nursing beds and 52 assisted living suites. The first independent living units were occupied in November 2007 at which time the facility became operational.

The 45,000 square foot community center (the Commons) includes a central dining room, a casual bistro, a private dining room for special occasions, a pub that hosts weekly happy hours, an event center that is used for everything from guest speakers to parties and religious services, a library with computer stations, gathering space, social and recreational facilities, gift shop, art gallery, beautician/barber facilities, rooftop greenhouse, and administrative offices. The Commons also includes a wellness nurse’s office, swimming pool and fitness center for our health and wellness programming as well as for transitional programming from our Health Center Therapy clinic. The Fox Run campus also includes carports for independent residents, a mile long paved walking path, wooded nature trails and a public garden that is used and maintained by the residents.

The Series 2015 Bonds are being issued to (a) refinance the outstanding principal amount of the Erie County Industrial Development Agency’s $44,235,000 original principal amount Revenue Bonds (Orchard Park CCRC, Inc. Project), Series 2006A (underwritten by Ziegler), which financed the construction of the original facility; (b) finance and/or reimburse the costs of the 2015 equipment with respect to the original facility; and (c) pay all or a portion of the costs incidental to the issuance of the Series 2015 Bonds, including any reserve funds as may be necessary to secure the Series 2015 Bonds.

Keith Robertson, Managing Director in Ziegler’s senior living practice, commented, “Despite a slower than expected initial fill-up due to the financial crisis, over the past five years, Fox Run’s management and board has done an extraordinary job focusing on what was needed to improve occupancy and enhance operations, resulting in an impressive “BBB-“(Stable Outlook) investment grade credit rating from Fitch. With an improving bond market, Fox Run’s bonds were sold to more than 15 investment funds, providing Fox Run with significant net present value savings and annual debt service savings, strongly positioning the community for the future. It has been an honor to work so closely with Fox Run over the years, witnessing first-hand how they’ve addressed their challenges. I’m glad we were able to deliver such a positive result for the community with this refinancing.”