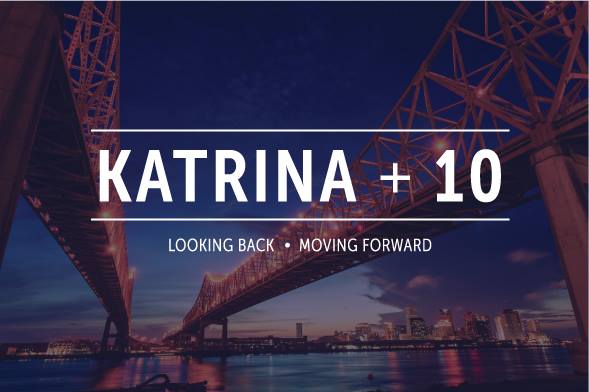 NEW ORLEANS, LA – Ten years ago, in a small office in downtown New Orleans, a start-up that had thrust itself into bringing some high-tech tools into the low-tech world of multi-family housing was about to have its world turned upside down. News reports were pouring in that Hurricane Katrina was headed for the Gulf Coast, and New Orleans was dead in its sight. Forecasters were predicting that it was going to be the worst storm in centuries, but most native New Orleanians remained unfazed – as hurricanes are part of living on the Gulf Coast.

Little did anyone know, Hurricane Katrina would turn out to be the costliest natural disaster as well as one of the top five deadliest hurricanes in the history of the United States. It not only left most of the city’s residents homeless, but it put an array of companies out of business. For a small tech firm trying to make its way into the market, Katrina left this new firm for dead: its employees were homeless and its office was uninhabitable.

Outside of Katrina, New Orleans is known for a lot of things like Mardi Gras, amazing food, and historic architecture. Technology has certainly never been on the tip of anybody’s tongue when asked what the city is known for. But times are changing, and as New Orleans continues to reinvent itself from the dark days of Katrina, it has emerged as the Silicon Bayou – America’s next great innovation hub.

Today, companies such as the technology division of GE Capital to international game maker, Game Loft, are flocking to New Orleans. Louisiana is now #1 in digital media growth in America. It has become the perfect place for an assortment of tech startups as incubators and growth labs pop up across the city to support high demand. But as some may have forgotten, there are those who blazed the trail before Katrina, those who were building tech before it was accepted in the Big Easy.

Enter 365 Connect, a home-grown tech company that started less than two years before Katrina hit New Orleans. Today, the online platform provider for the multifamily housing industry has grown from a bootstrapped startup that was nearly put of business by Hurricane Katrina to an internationally-recognized award-winning firm that has developed and perfected a Technology Platform that serves large apartment, student, and senior housing communities.

365 Connect Founder and CEO Kerry W. Kirby stated in a recent interview, “Katrina was certainly a turning point for us. It would have been easier to walk away and start over elsewhere. We actually lost everything overnight. They do not write about this in business school. Somehow I landed on the BBC Radio Network a few months after Katrina and was asked how I kept the company going despite the disaster – I aired live to a worldwide audience of 163 million. My email box melted a server with overwhelming support and encouragement. At that point, I decided it was time the tech community emerge from the shadows of Katrina.”

Emerge it has. Fast forward ten years, and now as one of the largest supporters of technology-related events in the city, there is not much that happens in the New Orleans tech scene that does not have the fingerprint of 365 Connect. Recently, the company got involved in Operation Spark, awarding a scholarship to a young man that wanted to learn how to code. The firm also backed Operation Spark’s Summerware Event where coders worked on a project that is part of the White House’s Police Data Initiative Project.

Since Katrina, 365 Connect has received a total of 30 technology awards, including the Louisiana Governor’s Technology Award and an assortment of national and international awards. Along the way, 365 Connect has gained favor with some of the biggest multifamily housing operators in the country that utilize its online platform to market, lease, and serve residents in their communities. Today, 365 Connect serves communities nationwide with an estimated 99% of its revenue generated outside the state of Louisiana, making it a beloved, high-profile company among the state’s economic development agencies. This month it was featured in Louisiana Economic Quarterly.

When asked about his extreme support of the local tech community and the city’s many tech-related events, Kirby confessed, “When we started back in 2003, there was no technology community. We were looked at as an oddity in the business community. Nobody saw us as a viable business. After Katrina, as the tech scene grew in New Orleans, we felt it was a changing of the guard – the emergence of a new economy.”

In addition to Operation Spark, 365 Connect is one of the largest supporters of Women in Technology (WIT), funding workshops and its flagship Bring Your Daughter to Hack Day Event, which initially was going to be canceled due to lack of funding in 2014 until 365 Connect heard about the event. The event served nearly 100 attendees last year. Kirby successfully lobbied GE to co-sponsor the event with him this year. The goal is to get 200 children involved in the October 2015 event.

Teen Tech Day is another 365 Connect favorite. It is a one-day interactive education conference to emphasize math, science, and engineering as tools to enable teens to use technology anywhere whether it’s as a hobby or a career. There are other events from meetups and startup events to hackathons. 365 Connectcontinues to do its part to build the technology community and inspire the city’s youth, including handing out logo embossed sunglasses to symbolize how bright the future is in the tech industry.

”As a home-grown company, we want to lead by example and not only support, but foster the next generation of innovators,” Kirby said. “Our focus is technology-driven educational programs as they strengthen our community by providing the future generation with an opportunity to enter the high-paying tech job market. As part of the ‘New Guards,’ we are here to change the playing field, making it fair and accessible to all. Katrina is behind us, the business landscape has changed, and as I tell our next generation of innovators, ‘Your future is so bright, you have to wear shades!’”