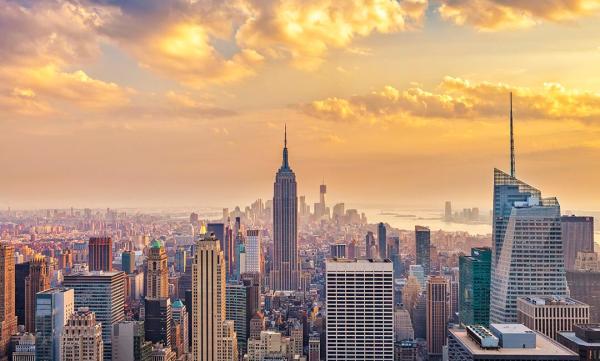 The New York City amount was substantially greater than what was reported by the metropolitan area ranked number two, Miami FL, at $3.0 billion and up 38% from a year ago.  Rounding out the top five metropolitan areas with their percentage change from a year ago were the following – Washington DC, $2.4 billion (down 15%); Boston MA, $2.2 billion (up 21%); and Seattle WA, $2.1 billion (up 49%).  Metropolitan areas ranked 6 through 10 performed as follows during the first half of 2015 – Los Angeles CA, $2.0 billion (down 30%); Houston TX, $1.9 billion (down 36%), Denver CO, $1.8 billion (up 56%); Dallas-Ft. Worth TX, $1.8 billion (up 5%), and Chicago IL, $1.7 billion (up 7%).  For the U.S. as a whole, commercial and multifamily construction starts during the first half of 2015 were reported at $73.2 billion, up 13% from a year ago.  (The commercial and multifamily total is comprised of these project types – stores, warehouses, office buildings, hotels, garages and service stations, and multifamily housing.)

"Market fundamentals such as occupancies and rents continue to show improvement, which supports further growth for commercial and multifamily construction," stated Robert A. Murray, chief economist for Dodge Data & Analytics.  "While the expansion for the overall economy remains tepid, as shown by the 2.3% growth for GDP in the second quarter, commercial and multifamily development continues to be a prime focus of the investment community in its search for yield.  The level of construction starts for commercial building is still well below the peak volume of the previous decade, even with double-digit gains over the past four years. Multifamily housing has shown steady growth since 2010, which has generated some concern about overbuilding, particularly in the New York City metropolitan area.  Still, New York City is seeing an even greater amount of multifamily construction starts this year, and the national multifamily upturn is now broadening in terms of geography, with construction gains taking place in more metropolitan areas."