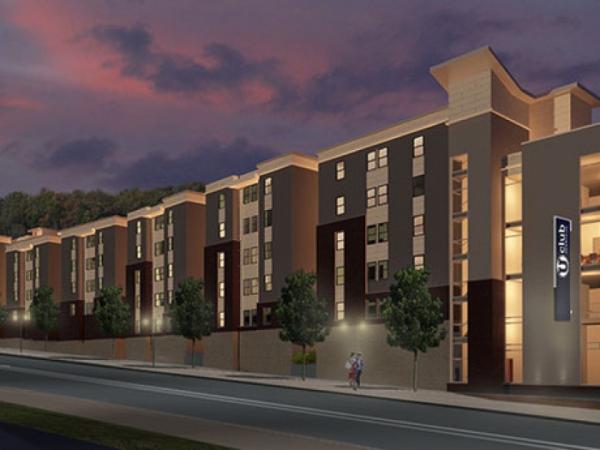 Since its beginnings in a 720-square-foot student suite atop Austin’s Dobie Center in 1993, American Campus has developed 100 student communities across the country for universities and for its own portfolio, totaling $4.6 billion and containing 65,000 beds. Starting with its first development in 1996 at Prairie View A&M University and now commencing its 100th development, American Campus has once again achieved a major milestone.

“For us, developing student housing is not just about the bricks and the mortar but about creating communities conducive to academic success, healthy living and personal growth,” said Bill Bayless, American Campus CEO. “Breaking ground on our 100th development at WVU where I started my career as a resident assistant is so special because that experience shaped the foundation of what ACC has become and has positively impacted how college students all across America live today.”

On July 29, University dignitaries, State representatives, local officials, and the American Campus development team gathered to celebrate this landmark event at a groundbreaking ceremony at the site of the former Sunnyside Commons, which has been demolished to make way for the development of U Club Sunnyside, a 536-bed modern student community.

Bayless’ dedication to his alma mater runs deep. Over the years, American Campus has been involved in the development of three additional projects for WVU including Lincoln Hall, Honors College, and most recently College Park Apartments, which opened last year.

Located in the Sunnyside District, U Club Sunnyside is a vital component of Sunnyside Up, a redevelopment initiative to improve the neighborhoods surrounding the WVU campus. American Campus purchased Sunnyside Commons in 2008, and with the support of this program, U Club Sunnyside residents will enjoy a premier residential experience within walking distance to class, the Mountainlair Student Union and student oriented retail.

U Club Sunnyside will offer an academically oriented and highly amenitized housing option for WVU students. With spacious living accommodations and a nearly 8,500-square-foot community center featuring an academic success center with private study rooms, large social lounge and state-of-the-art fitness center, students will be positioned for success both academically and personally. The community center’s outdoor amenity area will include a pool with spa and recreation area.

Preleasing for U Club Sunnyside begins this fall on September 1 when the company will be opening its leasing center located at 2192 University Avenue, Morgantown 26505.

American Campus has been nationally recognized for its development expertise when it was the recipient of the National Association of Home Builders’ 2013 Multifamily Development Firm of the Year Award. Additionally, over the last two decades American Campus has acquired more than $5 billion in assets and currently has a total enterprise value in excess of $7 billion.