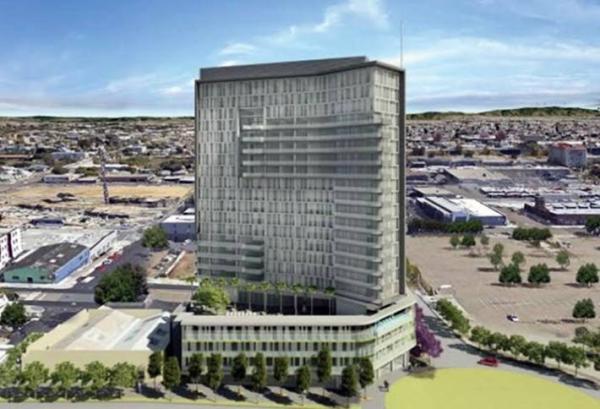 SAN DIEGO, CA - The Richman Group of California Development Company received unanimous approval yesterday from Civic San Diego to develop a mixed-use apartment complex that includes a 22-story residential tower with 226 apartments and more than 7,000 square feet of commercial space, as well as an adjoining low-rise building, playfully called The Sliver, which will include two penthouses, a restaurant with extensive outdoor seating and a park-like open space corridor.

With a working title of 330 13th Street, the project is located on a 38,846 square-foot undeveloped property on Park Boulevard, directly across from the San Diego Central Library. The proposed development occupies most of the block bounded by Park, 13th, J and K streets in Downtown’s East Village neighborhood, less than three blocks from Petco Park.

With a construction start planned for the second quarter of 2016, the project is estimated to cost in excess of $100 million. Highlights include a two-story “Sky Lounge” on the 19th floor with built-in bar and outdoor seating, a hotel-style pool area with spa and fire pits on the fourth-floor podium level and adjoining two-level recreation center with lounge, demonstration kitchen and gym.

“Given the site’s location, across the street from the much-loved Central Library and along the Bay-to-Park Link that joins San Diego Bay with Balboa Park, we realized we owed the city an iconic project that complemented the library and provided engaging public spaces,” said Daniels. “I think our team has done just that. DesignARC has designed a tower that complements the library and gives it breathing room. The tower is planned to include high-style residences and extensive, resort-worthy recreation.”

Quigley, whose Central Library design became an instant San Diego icon, designed the project’s secondary structure ‘The Sliver’ as an idiosyncratic, playful building to animate and give life to the tower. It features a vibrant restaurant space that includes generous outdoor seating and two mid-rise penthouses that, according to Daniels, should be “in the running as the most unique residences downtown.”

The proximity of the tower to the Central Library was a special challenge for the team. “We worked very diligently to have each of the pieces of the project speak to one another and to the Central Library as a whole,” said DesignARC principal Dion McCarthy, co-designer of the building with Mark Kirkhart. The result of our collaboration is a building that has character, is iconic with respect to the vista that terminates Park Boulevard, and yet is architecturally quiet in relation to the Library,” added McCarthy.

“There is a great difference between criticism and critique,” according to Kirkhart, “and Rob Quigley was very generous with his critique of the tower through multiple iterations of design. We feel that Rob’s local knowledge and insights resulted in a much better tower design and a much stronger design for the project overall,” added Kirkhart.

The tower is designed to include 63 studios, 72 one-bedroom units and 91 two-bedroom units, and six levels of secure parking (three subterranean and three above ground) with a total of 234 automobile spaces and 12 motorcycle spaces.

Spurlock Poirier has surrounded the project with inviting gardens and a wide promenade along Park Boulevard with a double row of London Plane Trees. The ground-level commercial space is planned to open onto a new park, diagonally connecting K Street with upper 13th Street. Along 13th Street, the project will include an open space corridor with a bioswale fashioned into a series of contemporary water features, and accompanied by seat walls and colorful water-wise plantings.

330 13th Street is The Richman Group’s second major San Diego residential project to be approved in the past five months. In February Civic San Diego approved F11, a seven-story luxury apartment/retail mixed-use development, located on the north side of F Street between 11th Avenue and Park Boulevard. Construction is scheduled start on F11 in the first quarter of 2016.

The Richman Group of California Development Company also has a 95-unit affordable apartment community under construction in Fullerton, Calif., and will break ground on a 132-unit luxury apartment community in Cerritos, Calif., this summer. It also has residential/mixed-use projects in North Hollywood and Downtown Los Angeles under development.