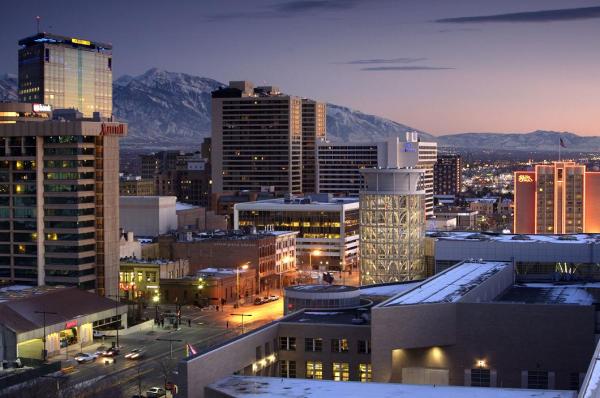 SALT LAKE CITY, UT - Wood Partners, one of the nation's most active multifamily developers, has broken ground on its first project in Salt Lake City, a 277-unit apartment community adjacent to a thriving urban redevelopment called The Gateway.

Alta Gateway, expected to be available for lease in fall 2016, will offer top-of-the-market amenities from a rooftop deck to a cyber café in a downtown housing market that is dated with scarce availability for urban professionals.

For Tim McEntee, director of Wood Partners' Rocky Mountain and Midwest region, it's the culmination of a 22-year search for a development foothold in his home state.

"I still have family and friends in Utah, so this accomplishment is personal for me," said McEntee, a Utah native and graduate of University of Utah, which is just 10 minutes away from Alta Gateway. "Downtown Salt Lake City is coming of age with robust employment, sophisticated shopping and entertainment and one of the finest mass transit systems in the country, thanks in part to the 2002 Winter Olympics."

The Gateway is a 40-acre, open-air retail, office and entertainment complex on the west side of downtown next to the Utah Jazz arena and the convention center. The Gateway includes over 100 stores, a planetarium, a children's museum, a concert venue, a 12-screen movie theater, and the Olympic Plaza from the Winter Games.

Alta Gateway, located at 100 South and 500 West, is next to a light rail line stop and is less than a block from the Salt Lake City Intermodal Hub, a $50 million multi-modal transportation hub that is served by Utah Transit Authority's light rail, commuter rail, and bus systems as well as by Amtrak and Greyhound.

Amenities at Alta Gateway will be significantly more than those offered by other luxury apartment communities in the area. The property will feature a spacious rooftop deck with a pool, fireplace and outdoor kitchen, as well as a community clubroom for socializing and entertaining. Residents can work out at a private fitness center, access the Internet at the cyber café, walk their dogs in an outdoor park and tune their bikes -- or skis -- at the onsite workshop. There's even a wine cellar for resident connoisseurs.

"We believe that Alta Gateway will be hugely attractive to young professionals and couples who want to live an active urban lifestyle," said Clay Iman, director for Alta Gateway. "The housing market in Salt Lake City has traditionally been suburban, but we believe job growth and infill development have fueled a strong demand for housing downtown, and capital is available to fund it."

Wood Partners leads the construction effort, overseeing local, third-party general contractor Rimrock Construction. The joint lenders on the project -- assembled by Clay Iman of Wood Partners -- are Comerica and Banner Bank. Rick Davidson at Newmark Grubb was the broker in the transaction.

"This is Wood Partners' first development in Utah, but it certainly Hope it won't be our last," McEntee said. "We are absolutely interested in building a stronger presence in this market and becoming an active part of the community my family has called home for over 50 years."