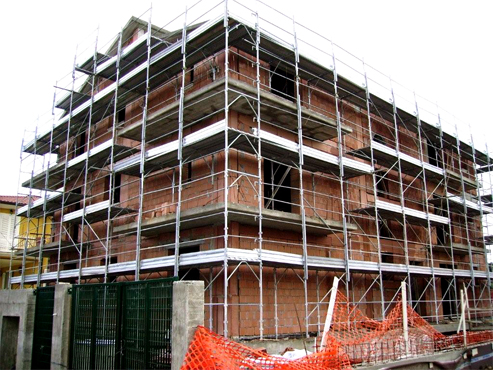 NEW YORK, NY - New construction starts in June dropped 15% from the previous month to a seasonally adjusted annual rate of $620.2 billion, according to Dodge Data & Analytics.  The decline followed an especially strong May, which benefitted from a $9.0 billion liquefied natural gas (LNG) export terminal in Texas being entered as a May start.  By major sector, nonbuilding construction in June fell sharply as the result of a steep pullback by its electric utility and gas plant category, while nonresidential building witnessed a less severe loss of momentum.  Residential building in June was able to post a slight gain, helped by the continued strength for multifamily housing.  During the first six months of 2015, total construction starts on an unadjusted basis were reported at $336.0 billion, up 23% from the same period a year ago.  If the volatile electric utility and gas plant category is excluded, total construction starts during the first half of 2015 would be up a more moderate 11% from the same period a year ago.

"Notwithstanding the up-and-down pattern that's been present on a monthly basis during the first half of 2015, the construction start statistics show that the expansion continues, with a few nuances," stated Robert A. Murray, chief economist for Dodge Data & Analytics.  "The 23% year-to-date increase for total construction overstates the strength of the expansion, and the underlying rate of growth is likely around 10%.  The lift to total construction starts in early 2015 by the electric power and gas plant category, namely several huge LNG terminals, will subside as the year proceeds.  Public works construction revealed surprising strength during the first half of 2015, but it too is expected to subside given essentially flat federal funding.  On the plus side, Congress has moved closer in July to taking the needed steps to shore up the depleted Highway Trust Fund.  For nonresidential building, the institutional building segment has maintained the upward track established last year, and manufacturing plant construction has included the start of a few more petrochemical plants.  On a mildly cautionary note, the commercial building segment showed some deceleration during the first half of 2015. Continued improvement in real estate market fundamentals should encourage a faster pace for commercial projects going forward.  Residential building is seeing more growth for multifamily housing, and single family housing is now edging upward, albeit in a very gradual and hesitant manner."

Nonbuilding construction in June plunged 38% to $162.5 billion (annual rate).  The electric utility and gas plant category fell 80%, after surging 229% in May with the start of a $9.0 billion LNG export terminal in Corpus Christi TX as well as three large power plants valued each in excess of $500 million.  June did include the start of several large power plants, including an $800 million gas-fired power plant in Massachusetts and three wind farms located in Texas ($450 million), North Dakota ($320 million), and Rhode Island ($300 million), but these were generally smaller in scale than the massive projects entered as May starts.  The public works categories as a group increased 15% in June, showing improvement after slipping back during the previous two months.  Highway and bridge construction in June advanced 16%, helped by the start of large highway projects in North Carolina ($368 million) and California ($253 million), as well as a bridge rehabilitation project in Massachusetts ($148 million).  The miscellaneous public works category grew 28% after a weak May, supported by the start of an $80 million outdoor stadium improvement project at Florida State University in Tallahassee FL.  On the environmental side, June gains were reported for sewer construction, up 19%; and water supply construction, up 3%; while river/harbor development held steady with the previous month.

For the first six months of 2015, nonbuilding construction jumped 62% compared to the same period a year ago.  The electric power and gas plant category soared 351%, lifted by the start of three LNG export terminal projects located in Corpus Christi TX ($9.0 billion), Hackberry LA ($8.4 billion), and Freeport TX ($6.0 billion), plus a liquefied petroleum gas export terminal in Freeport TX ($1.5 billion) and a LNG receiving terminal in Ingleside TX ($1.0 billion).  While the dollar amount of gas-related projects climbed sharply in the first half of 2015, 71% growth was also reported for power plant projects, led by several large solar farms in California.  The public works categories as a group were up 14% in the first half of 2015, helped by a strong showing for highway and bridge construction that advanced 30% relative to a sluggish first half of 2014.  The top five states ranked by the dollar amount of highway and bridge construction starts during the first half of 2015 were the following – Florida (reflecting the start of a $2.3 billion upgrade to Interstate 4), California, Texas, New York, and Illinois.  The environmental public works categories showed a varied performance during the first half of 2015, with sewer construction up 19%, water supply construction up 6%, and river/harbor development down 2%.  The miscellaneous public works category decreased 15% from its first half 2014 pace, which featured the start of several large mass transit projects.

Nonresidential building, at $190.6 billion (annual rate), retreated 8% in June, as weaker activity was reported for the majority of the structure types.  The commercial building group fell 13% following its 17% increase in May.  Both stores and warehouses weakened in June, dropping 9% and 53% respectively, while hotel construction slipped 11% from its heightened May amount.  Despite its May decline, hotel construction in June did see the start of several large projects, including a $411 million hotel resort in Lahaina HI and a $97 million hotel in Charleston SC.  Office construction in June ran counter to the other commercial structure types, advancing 11% from the previous month.  Large office projects that reached groundbreaking in June were $575 million for the office portion of the $618 million Manhattan West project in New York NY, a $202 million office building in Denver CO, and a $95 million office building on Roosevelt Island in New York NY as part of the Cornell NYC Tech Campus development.  Manufacturing plant construction in June bounced back 86% from a weak May, and included such projects as a $600 million refinery expansion in Texas and a $200 million ethanol plant upgrade in Nevada.

The institutional building group in June settled back 9%, as all the structure types except educational facilities experienced weaker activity.  Healthcare facilities dropped 10% from its elevated May pace, although June did see groundbreaking for several large healthcare projects, such as a $520 million hospital expansion in Houston TX, a $230 million hospital in Lakeland FL, and a $220 million hospital in Fremont CA.  The amusement-related category dropped 21%, yet June did see the start of such projects as a $102 million sports arena upgrade in San Antonio TX and a $100 million expansion to the Anaheim Convention Center in Anaheim CA.  Decreased activity in June was also reported for public buildings (courthouses and detention facilities), down 26%; churches, down 30%; and transportation terminals, down 66%.  The educational facilities category in June increased 10%, supported by the start of these projects – the $345 million Museum of the Bible in Washington DC, a $300 million research facility at Massachusetts Institute of Technology in Cambridge MA, and a $190 million science and health professions facility at Hunter College in New York NY.  There were also several large high school construction projects that reached groundbreaking in June, located in Maple Valley WA ($110 million), Portland OR ($97 million), and Winnetka IL ($89 million).

At the six-month mark of 2015, nonresidential building increased 4% compared to a year ago.  The commercial building group held steady with its year ago pace, aided by a substantial 41% increase for hotel construction but dampened by declines for stores, down 3%; office buildings, down 8%; and warehouses, down 12%.  The year-to-date decline for office buildings came as the result of the comparison to the first half of 2014 that included $2.3 billion for the office portion of the $2.5 billion Apple headquarters in Cupertino CA.  If the Apple headquarters project is excluded, the office building category in the first half of 2015 would be up 12%.  Over the January-June period of 2015, the top five office markets ranked by the dollar amount of new construction starts were the following – New York NY, Seattle WA, Boston MA, Washington DC, and Denver CO.  Office markets ranked 6 through 10 were the following – Austin TX, Portland OR, Houston TX, Charlotte NC, and Dallas-Ft. Worth TX.  The manufacturing plant category in the first six months of 2015 was up 5% compared to last year, helped by the start of several large petrochemical plants in similarity to what took place during 2014.  Going forward, the volume of petrochemical plant projects is expected to drop back during the second half of 2015.  The institutional building group in the first half of 2015 was up 6% compared to last year, with educational facilities registering a 5% gain.  Other year-to-date increases were reported for transportation terminals, up 58%; amusement-related projects, up 11%; and churches, up 3%.  Year-to-date declines were reported for healthcare facilities, down 1%; and public buildings, down 17%.

Residential building in June grew 2% to $267.1 billion (annual rate), after slipping 2% in May.  Multifamily housing provided the upward push, rising 8%, showing further growth on top of the gains reported earlier in the year.  There were eight multifamily projects valued each at $100 million or greater that reached groundbreaking during June, led by $218 million for the multifamily portion of the $250 million Ballpark Village in San Diego CA, a $217 million multifamily complex in Miami FL, and $191 million for the multifamily portion of a $250 million mixed-use building in Brooklyn NY.  Single family housing in June remained at the dollar amount reported for May, as the faint signs of an upward trend are still subject to hesitation on a month-to-month basis.

For the first six months of 2015, residential building in dollar terms was up 17% from the same period a year ago, showing some improvement from the 10% annual gain reported for 2014.  Multifamily housing registered a year-to-date increase of 29%, maintaining the upward movement that's been present over the past five years.  The top five multifamily markets ranked by the dollar amount of new construction starts in the first half of 2015 were the following – New York NY, Miami FL, Washington DC, Boston MA, and Los Angeles CA.  Multifamily markets ranked 6 through 10 were the following – Seattle WA, Denver CO, Chicago IL, Houston TX, and Atlanta GA.  Single family housing year-to-date was up 13%, reflecting both the comparison to the lackluster volume in the first half of 2014 and the slight yet uneven improvement that emerged in the second half of 2014 and has carried over into 2015.  By major region, the pattern for single family housing during the first half of 2015 compared to last year was the following – the West, up 21%; the South Atlantic, up 17%; the South Central, up 10%; the Midwest, up 6%; and the Northeast, down 6%.

The 23% gain for total construction starts at the U.S. level during the first six months of 2015 came from a varied pattern by geography.  The strongest year-to-date gain was reported in the South Central region, up 57%, which reflected the boost coming from the massive gas terminal projects that were entered as construction starts plus several large petrochemical plants.  The next strongest year-to-date gain was reported in the Northeast, up 27%, with support coming from further increases for multifamily housing and office buildings in the New York NY metropolitan area.  The remaining three regions showed the following year-to-date growth for total construction starts – the South Atlantic, up 15%; the West, up 6%; and the Midwest, up 5%.