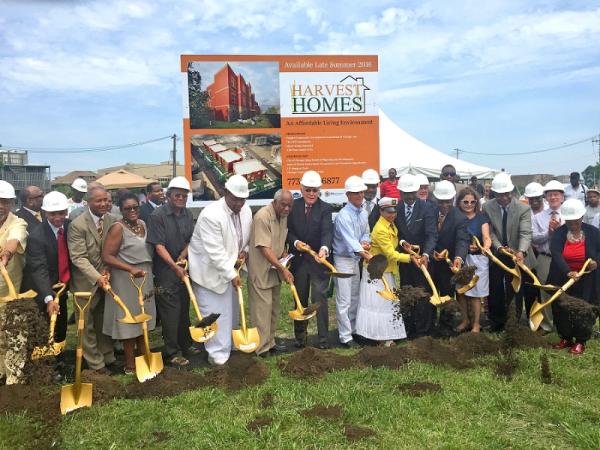 CHICAGO, IL - Members and friends of People's Community Development Association of Chicago, Inc. (PCDAC) were joined by representatives of The NHP Foundation (NHPF), Alderman Jason Ervin (28th Ward), and supporters and neighbors in the East Garfield Park community, to break ground on a new 36-unit affordable multi-family residential rental property. Harvest Homes Apartments, a joint venture between PCDAC and NHPF, is a new $12 million, 36 unit multi-family affordable housing development in the East Garfield Park community on Chicago's West Side. This public-private venture is made possible by the Low-Income Housing Tax Credit (LIHTC) program, America's main tool for creating and preserving affordable housing, and support from the City of Chicago's Department of Planning and Economic Development, the State of Illinois Department of Commerce and Economic Opportunity, J. P. Morgan Chase Bank, the Chicago Community Loan Fund, and NHPF.

Low- and moderate-income families continue to be priced out of their neighborhood due to rising rental rates. Beginning in early 2017, they will have a new affordable housing opportunity in East Garfield Park, a reviving area on Chicago's West Side.

"Today's groundbreaking is the result of this community's vision and voice, and I am pleased that the City of Chicago could support this effort," said Mayor Rahm Emanuel. "Harvest Homes builds upon our efforts to create and preserve 40,000 units of housing in Chicago. And it is an example of how Chicago's families and neighborhoods can benefit from public and private partnership to forge new futures for the community."

Alderman Jason C. Ervin, representing the City of Chicago's 28th Ward, which includes East Garfield Park, was also in attendance at the July 18 ceremony and noted of the development partnership:

"The Harvest Homes Apartments project promotes the use of city resources to provide new construction of 36 affordable housing units in the 28th ward for families juggling their hard earned income to make ends meet. We are excited to see this eagerly anticipated project!"

Today's event highlights how PCDAC, in partnership with NHPF, is making great strides in its ongoing efforts to bring new housing to its community. Despite the recent downturn in the economy, PCDAC is doing what some said could not be done. Harvest Homes Apartments will offer 36 two-, three-, and four-bedroom apartment units to low- and moderate-income families with annual household salaries ranging between $22,000 and $60,000. The construction started today is scheduled for completion early 2017.  The development will be built on what were once rubble-strewn vacant lots on Chicago's West Side. Harvest Homes will be the first new housing development built in East Garfield Park in the last 15 years.

"Harvest Homes Apartments begins to fulfill a critical need for affordable multi-family housing in Chicago's East Garfield Park," said Reverend Michael Eaddy, Pastor, People's Church of the Harvest and PCDAC President. "This is an optimistic and historic day for the residents of East Garfield Park. Harvest Homes will play a key role in the revitalization of our neighborhood."

According to Richard Burns, CEO of NHPF, "We at The NHP Foundation are very proud to be a part of this significant new development in Chicago and appreciate the contribution of our public and private partners in the project. NHPF has an expanding and valuable role to play in strengthening the affordable housing field in this country and Harvest Homes Apartments exemplifies our vision for the development and preservation of long-term affordable housing in high cost markets."

People's Community Development Association of Chicago (PCDAC), is a 15-year-old community-based nonprofit community development and housing developer, supporting low-income families through job training, youth programs, rehabilitating, and now new construction of affordable housing on the West Side of Chicago. Through rigorous, respected community involvement and a strong nonprofit partnership with The NHP Foundation of New York, PCDAC is turning vacant lots into affordable housing, transforming a distant dream into a current community reality.