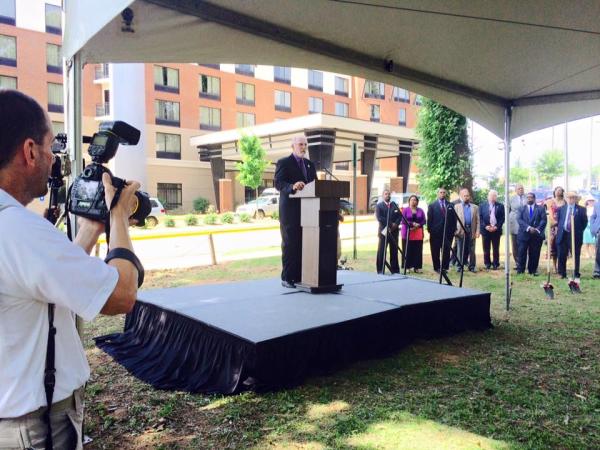 COLLEGE PARK, GA - More than 60 people from throughout Metro Atlanta gathered at 1777 Harvard Ave., College Park, to show their support for ThePad on Harvard, a mixed-use, transit-oriented development 400 feet from the College Park MARTA Station.

Public officials and business leaders hailed the project, which will begin Phase I construction of 109 deluxe apartment units immediately, as the cornerstone for revitalization of the communities around Hartsfield Jackson Atlanta International Airport. College Park Mayor Jack Longino told the gathering that ThePad on Harvard is a “cutting-edge development,” and the first multifamily project built in College Park in 40 years.

College Park City Councilman Tracey Wyatt echoed the mayor’s enthusiasm for what ThePad on Harvard represents for the city.

“I’ve been on the council 12 years and I’ve had a lot of groundbreakings. But I’ve never seen as many community partners as I see here today,” Wyatt said. “So, I know with the support of the community, this project is going to be successful.”

Representing Hartsfield Jackson Airport, Deputy General Manager Michael Smith said ThePad on Harvard reflects the robust economic investment the airport produces, with jobs in the airport itself as well as hundreds of thousands of support jobs in businesses surrounding the facility.

“As the economy grows, as the airport grows, as the community grows, there is always going to be a need for more vibrant housing and office space,” Smith said.

Joseph Folz, chairman of the Atlanta Aerotropolis Alliance and VP, General Counsel and Secretary for Porsche North America, said ThePad on Harvard is a model for the kind of growth the Alliance foresees for the area.

“A project like this really is part of the upward spiral that those of us who have invested in south metro are trying to create and are anticipating,” Folz said.

Air Realty Partners Rod Mullice and Romel Canete anchored the ceremony with thanks to the many partners and supporters who have made the project possible.

“This is really a community effort,” Mullice said. “Now, the young professionals who live and work in and around the airport will have an attractive choice that supports and facilitates their lifestyle aspirations.”

Jerome Russell, President of HJ Russell & Company and a partner in ThePad on Harvard, said he became intrigued with the potential of College Park to become a vital new destination for Metro Atlanta when his daughter was a student at nearby Woodward Academy.

“Rod and Romel brought the vision to us and I was on board from Day 1,” Russell said. “We see this as a pioneering project. We can’t wait. We’re going to make you proud.”