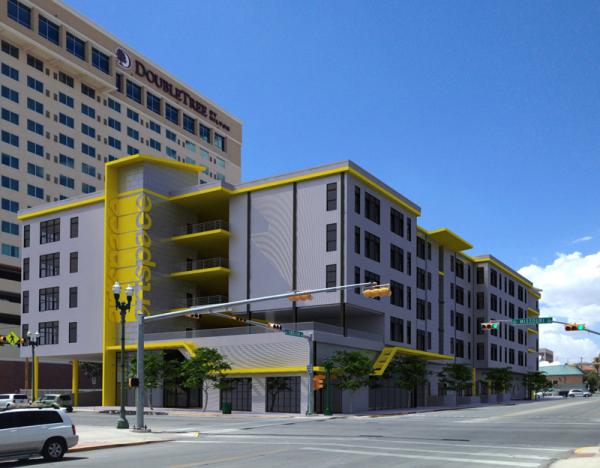 The project is a partnership of the nonprofit organization Artspace, the El Paso Community Foundation, and the city of El Paso.

"Artspace is thrilled to have received the AHP grant and to move the project forward. We will use it for architectural and engineering costs related to construction," said Sarah White, director of Property Development for Artspace Projects, based in Minneapolis, Minnesota. "We work quite closely with Wells Fargo across the country. They are very supportive of our mission to create, foster, and preserve affordable space for artists and arts organizations."

A five-story building, Artspace El Paso Lofts will be located at 601 N. Oregon Street, site of the former El Paso Saddleblanket facility. HHL Architects, in collaboration with ASA Architects of El Paso, completed the initial design that includes plans for 51 live/work artist apartments with large windows for natural light, a central meeting/gallery space, and 5,000 square feet of commercial storefront on the first floor. Occupancy is estimated to begin in the second or third quarter of 2016.

"Artspace El Paso is a unique arrangement of affordable housing and commercial space that Wells Fargo is very pleased to support," said Linda Nelson, client service consultant with Wells Fargo Community Lending & Investment. "The project represents a deepening commitment to the revitalization of El Paso's downtown district, and we are thrilled to be a part of it in collaboration with the Federal Home Loan Bank of Dallas."

AHP grants are available through FHLB Dallas member institutions, such as Wells Fargo. The grants assist in the development of affordable, owner-occupied and rental housing for very low- to moderate-income households located primarily within FHLB Dallas's five-state District of Arkansas, Louisiana, Mississippi, New Mexico, and Texas. In 2014, FHLB Dallas awarded $9.8 million in AHP grants to 33 projects that will result 1,586 new or renovated housing units. In the third quarter of 2015, FHLB Dallas will award $7.6 million in AHP grant funding through its member institutions.

"FHLB Dallas is committed to serving the needs of our members who are vital advocates for their communities," said Greg Hettrick, vice president and director of Community Investment at FHLB Dallas. "We are honored to support Artspace El Paso as the artists' community becomes a dynamic contributor to El Paso's downtown district."

The AHP grant in El Paso will help to fill a need for affordable housing for artists in this city of more than 682,000 people.