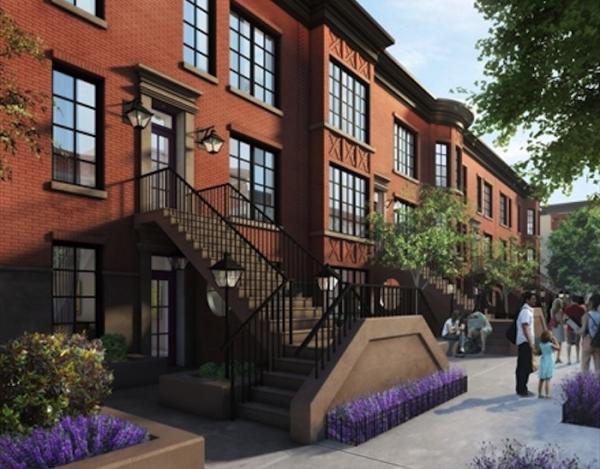 Designed by SHoP Architects, 38 Sixth Avenue (formerly known as B3) is the third building that Greenland Forest City Partners has broken ground on since December 2014 at Pacific Park Brooklyn, including 535 Carlton, a 100-percent affordable apartment building, and 550 Vanderbilt, a market-rate condominium building.

"This closing reflects the strength of our partnership with Greenland USA and the innovative talents that both of our organizations have brought to this effort," said David J. LaRue, president and chief executive officer of Forest City. "38 Sixth Avenue represents our continued commitment to deliver high-quality affordable housing at one of the country's most vibrant mixed-use communities in Pacific Park Brooklyn."

MaryAnne Gilmartin, president and chief executive officer of Forest City Ratner Companies, the New York-based subsidiary of Forest City Enterprises, said, "We couldn't be happier with the progress we are making to achieve our commitment to affordable housing as an integral part of Pacific Park Brooklyn. We all know that the need for this housing is critical and we are very proud to be working with the State and the City to bring this housing to market."

"We're very excited that Greenland Forest City Partners is moving aggressively to fulfill their commitment to a fast-tracked timeline for the delivery of affordable housing," said ESD President, CEO, and Commissioner Howard Zemsky. "They're on track to complete construction 10 years earlier than originally predicted and when construction commences at 38 Sixth Avenue, they'll have made good on their commitment to start construction on two 100-percent affordable buildings by June 30.  In addition to delivering much-needed affordable housing, 38 Sixth Avenue will also deliver jobs and economic activity."

"The people of this city need affordable housing built in real time. And make no mistake: affordable housing at Pacific Park is on the move. We committed last summer to get two new 100-percent affordable buildings in the ground by this June, and today, we are making good on that promise. Our administration is incredibly proud to have negotiated two buildings that each have double the affordable housing and reach more low-income families as the first buildings to rise at this site, all without increasing costs to the public. We are grateful to all our partners in the community, at Greenland Forest City and at the State who have worked to get these shovels in the ground," said NYC Deputy Mayor for Housing and Economic Development Alicia Glen.

"The opportunity to design a 100-percent affordable apartment building is one of the things that drew us to this project," Chris Sharples, principal at SHoP Architects, said. "Responsibly and creatively addressing the housing issue is enormously important for New York City. To create a scale for the building that will bridge between the arena and the neighborhood, we broke the mass into a series of interlocking volumes. Utilizing a rich palette of colored glass and metal fins, we added a level of material contrast and relief that accentuates the character of the different volumes."

For construction financing of 38 Sixth Avenue, the New York City Housing Development Corporation is providing an $83 million first mortgage loan for the building through the issuance of tax-exempt government debt obligations funded by Citi Community Capital. Greenland Forest City Partners is also receiving a $10 million subordinate loan from HDC and a $2 million subordinate loan from Citibank.

The first building at Pacific Park, 461 Dean Street (formerly known as B2 BKLYN), broke ground at the end of 2012 and will include 50 percent market-rate apartments, 30 percent middle-income and 20 percent low-income units. 461 Dean Street is being developed by Forest City separately from the joint venture.

Construction on the second residential building, 535 Carlton, began in December 2014. It will be 100 percent affordable, with 50 percent middle-income, 20 percent moderate and 30 percent low-income units. More than a third of the apartments at 38 Sixth Avenue and 535 Carlton will be sized for families. Construction of 550 Vanderbilt, which sits on the northwest corner of Vanderbilt Avenue and Dean Street and is a market-rate condominium building, also began in December 2014.

"It is imperative that we maximize every opportunity to construct affordable housing for Brooklynites that make up the foundation of our communities," said Brooklyn Borough President Eric Adams. "I thank Greenland Forest City Partners for their commitment to advancing toward affordable housing at Pacific Park."

Assemblyman Walter Mosley, Assembly District 57, said, "As the state assembly representative of the neighborhoods directly surrounding the Pacific Park Project, it pleases me to see the partnership between Forest City Ratner Companies and Greenland USA is producing the amount of affordable housing promised to the community, especially at such a crucial time where such housing is at a premium. We are facing a housing crisis, the likes of which we have not seen since post-World War II, and it is critical that projects like Pacific Park continue to create and maintain affordable housing in an effort to ensure hard working families can continue to live in this great city and state."

"The influx of new residential buildings in communities across New York City too often excludes the thousands of families who cannot afford market-rate housing units. The highly-anticipated construction of 38 Sixth Avenue will help alleviate the overwhelming need for affordable housing in Brooklyn while preserving the cultural and economic diversity of its surrounding community," said Council Member Laurie A. Cumbo.

"HDC is committed to financing high impact projects that will create the quality affordable housing needed to foster strong, economically diverse neighborhoods," said HDC President Gary Rodney.  "38 Sixth Avenue, the latest addition to the Pacific Park Brooklyn development, leverages an innovative financing structure to achieve affordability that will add to the fabric and diversity of this vital Brooklyn hub.  Thanks to a collaborative partnership with Citi Community Capital, Empire State Development, and HPD, HDC was able to provide the financing for this mixed income housing development, delivering on the goals of the Mayor's housing plan."

Bertha Lewis, Founder and President of The Black Institute, said, "Pacific Park Brooklyn is turning into an affordable housing engine. When we announced this project nearly 12 years ago, some expressed doubt that the housing would come to fruition. Today, with affordable housing an even greater crisis in New York, Pacific Park buildings are not only becoming a reality, they are becoming a model for how to build housing and communities that reflect the diversity, in every way, of our City.  I applaud the joint venture for its commitment to the promise of Pacific Park and their desire to move quickly."

Residents of the affordable units will be selected through a lottery system overseen by the New York City Housing Development Corporation.  Pacific Park Brooklyn is a state-regulated development established by a General Project Plan adopted by the Empire State Development (ESD) Board of Directors in 2006 and governed by ESD. Pacific Park Brooklyn is expected to include 6,430 units of housing, more than one-third of which will be affordable.

The groundbreaking at 38 Sixth Avenue brings the total number of affordable apartments currently under construction at Pacific Park Brooklyn to 780 units, with the development expected to eventually include 2,250 affordable units.