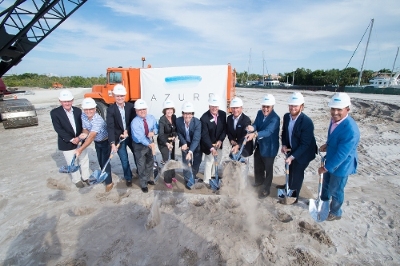 Frankel used a silver shovel to officially break ground--citing a family tradition, begun by E.J. Frankel in 1936, and repeated at over 40 residential and commercial projects built by Frankel Enterprises over the past 75 years including the local communities of Admiral's Cove, Valencia at Abacoa and San Michele.

The city of Palm Beach Gardens approved the project last summer for 113 units to be built on 14 acres at the Intracoastal Waterway and Donald Ross Road.

Sales of AZURE's luxury condominium residences began in November with immediate acceptance from the local market. Fifty million dollars in sales have been recorded. As of the ground breaking, Frankel had sold 38 of the 46 residences in AZURE's first building at prices ranging from $975,000 to $2.5 million. Later this month he plans to commence sales of residences within AZURE's final building with floor plans ranging from 2,600 to 5,300 sq. ft.

"We found that at the top of the condominium market, there exists a demand for exceptionally large residences," says Frankel.

Gilbane Building Company estimates that construction of AZURE's first building will be completed in the Spring/Summer of 2016. Gilbane is a global leader in construction services and is known for iconic residential, commercial and government buildings such as the Smithsonian Air and Space Museum, the National Capitol Visitors Center and the Vietnam War Memorial. The company was recently awarded the contract to manage the comprehensive expansion and renovation of the Norton Museum of Art in Palm Beach County.