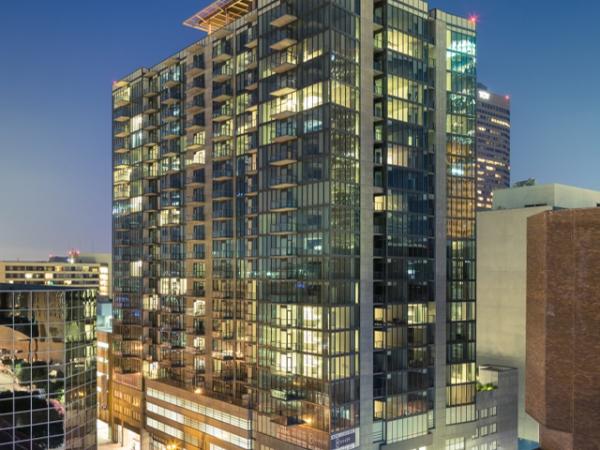 "We're pleased and honored to see that 8th + Hope is being recognized for its important contribution to downtown revitalization," said Brian Hanson, Wood Partner's development director for California. "The high-rise has an ideal combination of outdoor amenities and a vibrant urban environment, 8th+ Hope is perfect for the young professionals who are flocking to downtown Los Angeles."

In announcing the Multifamily Project of the Year Award, the Los Angeles Business Journal stated that 8th + Hope "is enjoying great success and accelerated leasing while enhancing and connecting to the surrounding downtown L.A. community with its arts-focused Ground Floor Project."

The Ground Floor Project is a Wood Partners initiative that is also being implemented in Seattle, San Francisco and Portland developments. This first-of-its-kind community partnership unites arts education nonprofits, prominent individuals and other stakeholders within downtown and greater Los Angeles to promote both culture and community. The structural design of 8th + Hope features a convertible street-level space that offers a platform for emerging local culture within music, theater, dance, visual art, craft and culinary art.

"8th + Hope is a multifamily project many thought would never come to fruition," Los Angeles Downtown News stated in announcing the Downtowners of Distinction award. "Wood Partners bought the site before the recession and saw its plans delayed. However, the team never gave up and now has achieved its vision."

8th + Hope is an integral part of revitalization efforts in downtown Los Angeles, which has seen a surge of commercial and residential development as well as entertainment venues in recent years.