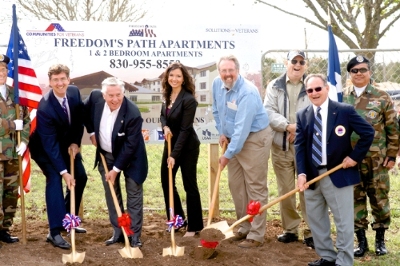 KERRVILLE, TX - Texas is home to more than 1.6 million veterans, second only to California in veteran population, according to a 2012 U.S. Census Bureau report. The Freedom's Path at Kerrville apartments will help provide affordable housing for some of those veterans when it opens at the end of 2015. A ceremonial ground-breaking event today paid tribute to the $10.7 million project, which received a $500,000 Affordable Housing Program (AHP) grant from the Federal Home Loan Bank of Dallas (FHLB Dallas).

"In 2011, the Veterans Administration started the BURR Initiative (Building Utilization Review and Repurposing Initiative) to repurpose land on VA campuses to create affordable housing for homeless and disabled veterans," said Adam Gratzer, project manager with Communities for Veterans, the developer of the project. "Kerrville is one of 38 sites identified on VA properties for use as affordable housing."

The AHP award will be used for construction costs and gap financing, Mr. Gratzer said. The three-story development at Kerrville will provide 49 units in its first phase with 27 one-bedroom and 22 two-bedroom units. A second phase is planned that will provide an additional 49 units, also designated for disabled veterans who earn 60 percent or less of the area median income.

Residents of the future Freedom's Path at Kerrville will have access to green space with a picnic area, rooms for rehabilitation and therapy, a laundry room, library, and a fitness center.

"This project has been a long time in coming, and without the commitment and assistance of a lot of people, it would not be underway now," said Mr. Taylor. "Of special note are the Federal Home Loan Bank of Dallas; the Home Depot Foundation through a grant to the City of Kerrville; the Texas Department of Housing and Community Affairs with the allocation of Housing Tax Credits; the U.S. Department of Veteran Affairs through both the Ground Lease and a Capital Contribution; and Bank of America, which is providing both debt and equity to the project."

AHP grants are available through FHLB Dallas member institutions. The grants assist in the development of affordable, owner-occupied and rental housing for very low-to moderate-income households located primarily within FHLB Dallas' five-state District of Arkansas, Louisiana, Mississippi, New Mexico, and Texas. In 2014, FHLB Dallas awarded $9.8 million in AHP grants to 33 projects that will result 1,586 new or renovated housing units. In 2015, $7.6 million will be allocated to AHP projects.

"FHLB Dallas is honored to support those who have sacrificed so much for our country," said Greg Hettrick, vice president and director of Community Investment at FHLB Dallas. "We look forward to a future of hope for these veterans, who now will benefit from affordable housing."