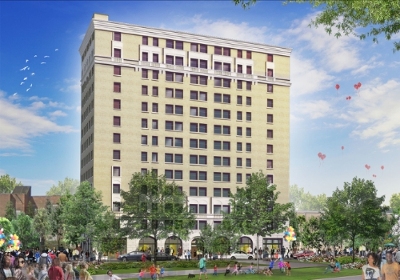 DETROIT, MI - Olympia Development of Michigan is announcing its plans to renovate and restore Detroit's historic Eddystone Hotel and create market-rate and affordable housing units in the building and throughout The District Detroit. The Eddystone, located at 110 Sproat Street at Park Avenue, was designed by Louis Kamper and opened in 1924. This announcement reinforces Olympia's ongoing goals for both historic preservation and affordable housing as part of The District Detroit.

Under plans to be submitted to the City of Detroit Historic District Commission, Olympia envisions a complete renovation of the former Eddystone Hotel in the spirit of its original design. Approximately 20 percent of the Eddystone's roughly 100 units would be reserved as affordable housing. The Eddystone will also feature first-floor retail space, consistent with hundreds of millions of dollars in private mixed-use development plans throughout The District Detroit. Olympia Development is also announcing a 20 percent affordable housing goal across The District.

"Restoring the Eddystone Hotel helps preserve an important piece of Detroit's rich architectural history while creating much needed job opportunities and affordable housing for Detroiters," said Rod Blake, Director of Development for Olympia Development of Michigan. "We're excited to begin this restoration plan, which will support the authentic Detroit character of The District Detroit. Olympia Development is making economic opportunity for Detroiters, affordable housing and a thoughtful, historic approach central to our plans for transforming this vital area."

Pending zoning approval by the Detroit City Council, full construction on the Detroit Events Center can begin this spring. In the meantime, site preparation will continue with fencing, equipment mobilization and field work beginning in the coming days. Once approved by the Historic District Commission, work on the Eddystone Hotel could begin as early as fall of 2015.

The Detroit Events Center, slated to be completed in 2017, will be the home of the Detroit Red Wings. The new, world-class arena will be a model of innovation for such a facility in a downtown setting. It will serve not only as a powerful, continual generator of activity, but also a good urban neighbor. Detroit residents are expected to earn more than $100 million in income from the Events Center project alone, with significant additional income to be created through future private development.

Olympia continues to carefully evaluate all buildings within The District Detroit area that are historically designated, or that may otherwise hold historic value. The company is working with preservation-minded specialists to finalize a comprehensive plan that will consider a wide variety of factors including ensuring health, safety and security; job creation; building an authentically Detroit development that blends the old and the new; and minimizing risk for the Detroit Downtown Development Authority and the city.

Olympia will also seek approval from the Detroit Historic District Commission to demolish the empty former Harbor Lights building at 2643 Park Avenue. This structure is situated within a higher-security zone for the new arena, which precludes its redevelopment for residential use – the only reuse for which the structure is suitable. In addition to maximizing public safety, removing the Harbor Lights will allow Olympia to build a sizable, underground loading dock that is a requirement for ensuring a market-competitive facility that attracts major concerts and events that will bring jobs and revenue to the city.

Construction of the arena and surrounding District is expected to generate at least $1.8 billion in total economic impact, 8,300 construction and construction-related jobs and 1,100 permanent jobs. More than $100 million in income from the arena project alone is expected for Detroit residents, with significant additional income to be created through future private development. Learn more at www.DistrictDetroit.com