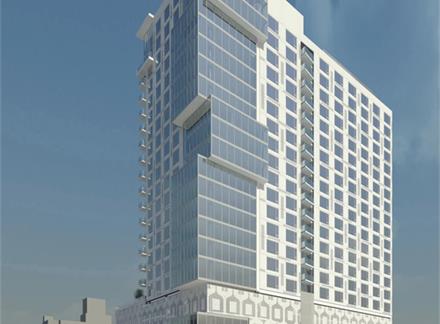 LOS ANGELES, CA - Trumark Urban announced the beginning of construction on TEN50, a new 25-story high-rise at 1050 S. Grand in Downtown Los Angeles featuring 151 stylish residences. The condominium development located at the northeast corner of South Grand Avenue and 11th Street in South Park signals a new era in Downtown L.A. living. TEN50 will be the first high-rise condominium tower to be completed there in the past 10 years.

"In a progressive move towards the future, Trumark Urban is including a landing pad for drone package deliveries," Hearing said.

Residents will be able to receive packages in a designated landing spot on the sixth floor amenity deck.

"Downtown Los Angeles, which was recently called 'America's Next Great City,' is in the midst of a renaissance. Trumark Urban is about to take it to the next level with TEN50," Hearing said. "This future-forward high-rise is going to exude style and sophistication."

Located in the center of iconic destinations such as The Orpheum Theater, Staples Center, L.A. Live, FIGat7th and the Los Angeles Convention Center, TEN50 is also surrounded by world-class dining, entertainment and recreation.

The luxury condominium development will include resort-style amenities, and will offer one- and two-bedroom residences as well as penthouse and two-story penthouse units. Residents will have access to beautifully designed indoor and outdoor lifestyle spaces that are ideal for entertaining, such as a lounge, conference center and pool deck, as well as private dining areas—both inside and outside—that feature green spaces, barbeque grills, fireplaces, and screening rooms. In addition, the development offers thoughtfully designed areas that are dedicated to health and wellness, including a yoga garden, cabanas, pool, spa, and fitness center.

Construction is scheduled for completion by September 2016.