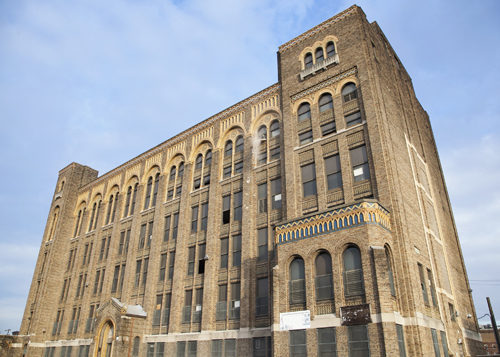 NEW YORK, NY - Procida Funding's 100 Mile Fund announced that the firm closed a $16,200,000 construction loan for the famous Mural Arts Lofts building aka the Thaddeus Stevens School. Developer, Eric Blumenfeld, is using the funds to renovate the historic site into 56 loft-style apartments featuring many of the original architectural elements such as the chalkboards, window details and the historic wood cabinetry. This project is just part of Blumenfeld's continued efforts to transform the North Broad Corridor section of Philadelphia.

"The architectural detail from the original design blended with a modern interpretation of loft style living will be interwoven together in an elegant way creating some of the most charming residential living opportunities yet to be presented in the Philly real estate market" said North Broad Street trailblazer Eric Blumenfeld who went on to say: "I am thrilled to have the support, dedication and wherewithal of a great man like Billy Procida and his amazing organization supporting us in our efforts. Billy is a pioneer and although sometimes he drives me crazy, I love him like a brother and I admire his passion."

Procida Funding has made over $3 billion in investments since it was founded by award winning developer and general contractor, Billy Procida in 1995.  Procida is known as one of the first to develop in the Tribeca, Harlem, and the South Bronx markets in the 1980's.  "Eric has the vision and controls the best assets in the North Broad real estate market.  I like to invest local with locals.  With Domus as his contractor, Richard Sauder and David Chou as Architect and Engineer (whom date back to his father's days as a Philadelphia developer) and Eric's vision, we are excited to be a part of this great project and to see the North Broad transformation," said Billy Procida.

Construction will commence immediately, with occupancy expected in early 2016.