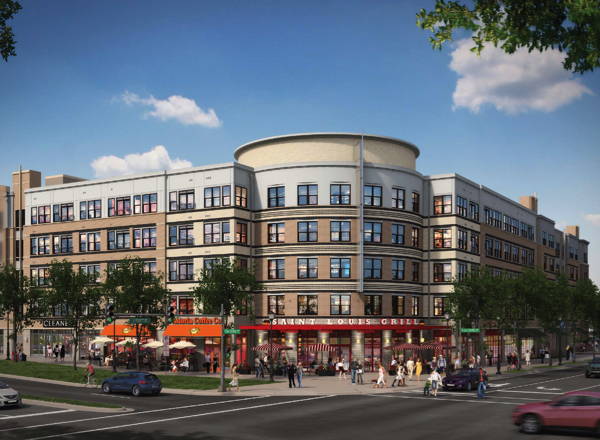 “The launch of Modera Tempo is an important catalyst to the long-planned redevelopment of the Van Dorn corridor, from here to Landmark Mall,” said Alexandria, VA Mayor Euille. “Over the next two decades, the entire West End of Alexandria will be transformed.”

“Alexandria is a truly walkable city, and we are proud to extend the walkability of its historic core to the West End, where residents can live in close proximity to Metro and major employers,” said Amirali Nasserian, vice president of development for Mill Creek Residential. Modera Tempo’s first building has delivered, with more than 50 apartments already leased. A second building will deliver in February, followed by a third in April.

During the grand opening, Nasserian dedicated a ten-foot outdoor sculpture by Alexandria artist Larry Moriss to the memory of Michael McGuire, who passed away last year. As member of The Pinkard Group, McGuire was instrumental in the early process of acquiring, planning, and rezoning the site beginning more than ten years ago. MCR took over the development process in 2010.

Located on the corner of South Van Dorn and South Pickett Streets, Modera Tempo is just minutes to the Van Dorn Metro; residents can walk or use the community’s free shuttle service. But the shuttle is just one of the many amenities that will enhance residents’ lifestyles. The community will offer residents two 24-hour fitness centers, two hotel-inspired pools, three private courtyards, concierge service, a dog spa, social kitchen, yoga studio, bike storage, and complimentary wi-fi in common areas. A retail plaza, open to the public, already is coming to life with the recent opening of Smashburger.

The community was designed to fuse western Alexandria’s early 20th century art modern aesthetic with other traditional architectural elements. “We took design cues from the original George Washington Middle School off Mount Vernon Avenue,” said Chris Gordon, AIA of KGD Architecture. “We also wanted to ensure that each of the buildings is distinctive, so that it has the feel of a neighborhood rather than a single development.”

Modera Tempo is a joint venture of Mill Creek Residential and AEW Capital Management. AEW is developing the property on behalf of one of its separate account clients.

Including Modera Tempo, Mill Creek owns and operates 1,979 apartment homes, in the Washington, DC metropolitan area, with 1,000 more in its development pipeline.