New Construction Starts Advances 7 Percent to $575.3 Billion for 2014 According to Dodge Data 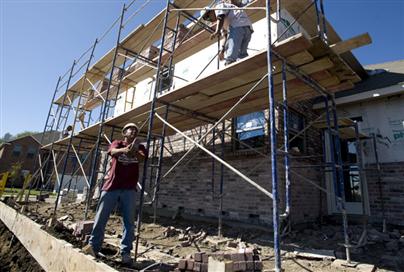 NEW YORK, NY - New construction starts in December retreated 16% to a seasonally adjusted annual rate of $568.2 billion, according to Dodge Data & Analytics.  The decline follows the 13% increase reported for total construction starts in November, when activity reached its highest level in 2014 with the lift coming from several exceptionally large projects, including a massive lithium ion battery manufacturing plant, an airport terminal redevelopment program, and a liquefied natural gas terminal.  Both nonresidential building and nonbuilding construction in December witnessed substantial percentage declines relative to their robust November amounts.  At the same time, residential building managed a modest gain in December with the help of further growth by multifamily housing.  For 2014 as a whole, total construction starts climbed 7% to $575.3 billion.  This continues the pattern of moderate expansion for total construction starts reported during the previous two years – 2012, up 10%; and 2013, up 9%.

The December statistics produced a reading of 120 for the Dodge Index (2000=100), compared to 143 in November.  For all of 2014, the Dodge Index came in at 122, so while December was down considerably from the previous month it still held close to the average for the full year.  "The construction start statistics can often be volatile on a month-to-month basis, given the presence of large projects in any one given month," stated Robert A. Murray, chief economist for Dodge Data & Analytics.  "The month of November included four projects valued each in excess of $1 billion, while the largest project in December was a $700 million steel mill.  A better sense of the progression of construction starts over the course of 2014 comes from looking at the data on a quarterly basis.  Activity weakened during the first quarter of 2014, falling 10% from the end of 2013, but then showed steady improvement as 2014 proceeded, with gains in the second quarter, up 9%; the third quarter, up 5%; and the fourth quarter, up 2%."

"The continued expansion for construction starts in 2014 carried several notable features," Murray continued.  "The nonresidential building sector showed more growth for commercial building, the first increase for institutional building after five years of decline, and a surge of manufacturing plant projects.  Residential building was supported by the strengthening multifamily market, but was not able to offer the same upward push as in 2012 and 2013 given the flat performance by single family housing.  Nonbuilding construction showed a slower pace for public works, and while electric utilities lost further momentum the decline was much less severe than in 2013.  Looking ahead to 2015, nonresidential building should benefit from more private investment directed at commercial building and more financing for school construction given the passage of recent bond measures.  However, the rate of increase for nonresidential building will be dampened by a slower pace for energy-related manufacturing projects.  Residential building should see more multifamily housing while renewed growth for single family housing will need the banking industry to provide potential homebuyers with greater access to home mortgages.  Nonbuilding construction will be helped by the fact that federal spending levels for fiscal 2015 were set in December, but Congress needs to address the stopgap federal transportation legislation that expires at the end of May."

Nonresidential building in December fell 23% to $196.6 billion (annual rate), following its 32% increase in the previous month.  Manufacturing plant construction plunged 73%, given the comparison to November that included the $2.5 billion lithium ion battery factory for Tesla Motors in Nevada and a $1.3 billion nitrogen urea plant in Oklahoma.  While December did include the start of a $700 million steel mill in Arkansas, the next largest manufacturing projects were valued at $70 million or less.  The commercial building group in December slipped 5%, given a steep drop for hotels, down 34%; and much smaller declines for warehouses, down 3%; and offices, down 2%.  The office category did include several noteworthy projects as December starts, such as the $304 million office portion of a $675 million mixed-use project in Miami FL, a $191 million office complex in Mountain View CA, a $150 million office building in Boston MA, and a $124 million office complex in Seattle WA.  Store construction in December showed improvement after a lackluster November, rising 10%.

The institutional building group in December fell 10%.  Much of the decline came as the result of a sharp 71% drop for transportation terminal work, which had been boosted in November by the start of the $1.6 billion airport terminal redevelopment program in Salt Lake City UT.  Educational facilities slipped 4% in December, although the latest month did feature the start of seven high schools valued at $50 million or more, including a $126 million high school in Irvine CA.  Healthcare facilities fell 5% in December, despite the start of a $328 million hospital in the Houston TX metropolitan area and a $143 million hospital addition in Avon OH.  On the plus side, the public buildings category jumped 62% in December, with the lift coming from a $168 million prison project in San Diego CA.  Also reporting large percentage gains were church construction, up 41%; and amusement-related work, up 40%, with the latter being boosted by the start of a $100 million convention center in Casa Grande AZ.

For 2014 as a whole, nonresidential building climbed 17% to $208.2 billion, following the 11% gain that was reported in 2013.  The manufacturing building category surged 74%, lifted by the start of numerous energy-related plants located in the Gulf Coast region of Texas and Louisiana, such as the $3.0 billion Chevron Phillips cracker ethylene plant and the $3.0 billion Exxon petrochemical plant expansion.  If the manufacturing plant category is excluded, nonresidential building in 2014 would be up 11%, after an 8% increase in 2013 on a similar basis.  The commercial building group in 2014 advanced 15%, led by a 28% increase for the office category that featured the start of such projects as the $2.3 billion office portion of the $2.5 billion Apple corporate headquarters in Cupertino CA and the $806 million office portion of the $933 million Comcast Innovation and Technology Center in Philadelphia PA.  The top five metropolitan areas ranked by the dollar volume of new office starts in 2014 were – New York NY, San Jose CA, Houston TX, Philadelphia PA, and Chicago IL.  The other commercial categories showed this performance in 2014 – hotels, up 23%; warehouses, up 18%; and stores and shopping centers, unchanged from the previous year.

The institutional building group for all of 2014 increased 8%, marking the first gain since 2008.  The educational facilities category rose 12%, and featured greater activity for these major segments – K-12 school construction, up 18%; and college and university construction, up 19%.  Increases were also reported for public buildings, up 13%; amusement-related work, up 12%; and transportation terminals, up 10%.  The healthcare facilities category in 2014 did not participate in the broad upward trend, as it slipped 1%.  Church construction in 2014 continued to be depressed, falling an additional 10%.

The 2014 amount for residential building was $227.8 billion, up 8%, and a much smaller increase than what was reported in 2012, up 31%; and 2013, up 26%.  Single family housing grew just 2% in dollar terms, considerably less than its 27% jump in the previous year.  The regional pattern for single family housing in 2014 was mixed.  Gains were reported in the South Central, up 7%; the South Atlantic, up 3%; and the Northeast, up 2%; while declines were reported in the West, down 1%; and the Midwest, down 2%.  Multifamily housing in 2014 climbed 28%, and has now shown annual dollar gains in excess of 20% for five straight years.  By major region, multifamily housing revealed this performance in 2014 – the Northeast, up 41%; the South Atlantic, up 30%; the South Central, up 23%; the Midwest, up 20%; and the West, up 17%.  The top five metropolitan areas in terms of the 2014 dollar amount of multifamily starts were New York NY, Miami FL, Washington DC, Los Angeles CA, and Boston MA.  Metropolitan areas ranked 6 through 10 were – Chicago IL, Seattle WA, San Francisco CA, Philadelphia PA, and Dallas-Ft. Worth TX.

Nonbuilding construction in December plummeted 32% to $124.3 billion (annual rate), following its 21% hike in November.  A large share of December's decline was due to a 79% plunge for the electric power and gas plant category, which had been boosted in November by the start of the $3.6 billion Dominion Cove Point LNG Liquefaction project in Maryland and a $571 million natural gas-fired power plant in Virginia.  Although December did include a $500 million retrofit of four coal-fired power plants in Alabama, this was not enough to cushion the category's steep December drop.  New public works projects in December fell a more moderate 10%, and reflected decreased activity for water supply systems, down 25%; and miscellaneous public works (site work, mass transit, pipelines), down 43%.  On the plus side, highway and bridge construction in December increased 2%, and included the start of the $555 million Kosciuszko/ Newtown Creek bridge rehabilitation project in Brooklyn and Queens NY.  Growth in December was also reported for river/harbor development, up 3%; and sewer construction, up 6%.

For the full year 2014, nonbuilding construction dropped 6% to $139.2 billion, which followed the 9% decline reported for 2013.  Public works construction overall in 2014 was down 7%, sliding back after its 12% gain in the previous year.  Highway and bridge construction retreated 15% from a very strong amount in 2013 that included several substantial bridge projects, such as the $3.1 billion Tappan Zee Bridge replacement in New York.  Declines were also reported for river/harbor development, down 6%; and water supply systems, down 7%.  Annual gains were reported for miscellaneous public works, up 4% (with much of the support coming from increased mass transit work), and sewer construction, up 8%.  The electric utility and gas plant category in 2014 retreated 2%, a much smaller drop than the 55% plunge in 2013.  While alternative power generation projects (primarily solar and wind) were down sharply, more traditional power generation plants held steady, and natural gas plants increased with the start of the Dominion Cove Point LNG Liquefaction project.

The 7% gain for total construction starts at the national level in 2014 was the result of greater activity in all five major regions.  Leading the way was the South Central, up 14%, followed by the South Atlantic, up 11%; the West, up 7%; the Northeast, up 2%; and the Midwest, up 1%.