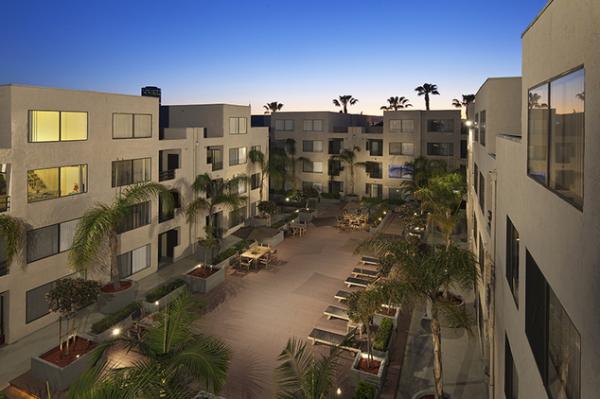 IRVINE, CA - SARES REGIS Multifamily Fund acquired Pine@Sixth, a community of 158 apartments in Long Beach, California. It is the ninth apartment community purchased by the fund and represents full deployment of the fund’s $114 million.

“With the closing of Pine@Sixth, Fund I is complete,” said Bill Montgomery, the fund’s co-chief investment officer. “In 18 months we have purchased a diverse group of properties with 1,377 apartments in Seattle, Portland, San Jose, Los Angeles, San Diego and Denver. Their capitalization total was more than $329 million,” Montgomery said.

Located in the North Pine district of Long Beach at the corner of Sixth Street and Pine Avenue, the community features a mix of studio, one- and two-bedroom floorplans with lofts on the upper floor. Built in 1986, the property is a podium design with three levels of living space over a ground-level garage and 8,661 sq. ft. of storefront retail.

Long Beach is undergoing a re-gentrification process with housing and new shops and restaurants expanding in the downtown market. Montgomery said that Pine@Sixth, which is a short walk from the center of that activity, fits with the fund’s strategy to add value through renovation, repositioning and aggressive operation.

Previously owned by UDR and originally planned as a condominium conversion before the economic downturn, the asset has had no capital improvement or significant maintenance upkeep for some time. After putting mechanical systems in good repair, plans call for an exterior facelift to include a multicolor paint scheme and art-deco brow elements added to the retail façade.

Montgomery said the resident courtyard space will be “re-imagined” as entertainment and social space and will include a fire-pit, water feature, landscaping improvements and expanded outdoor kitchen space. One of the community’s laundry facilities will be converted to a dog-wash station. The leasing center will be relocated. The fitness facility will be refurbished.

Long Beach has one of the world’s largest seaports and a solid job base in and around the city. There is easy freeway access to job centers in Orange County and Los Angeles and a Metrorail stop is one block from the property.

This will be a significant renovation and reimagining of this community that will completely reposition Pine@Sixth to compete with upgraded and new communities in the submarket.