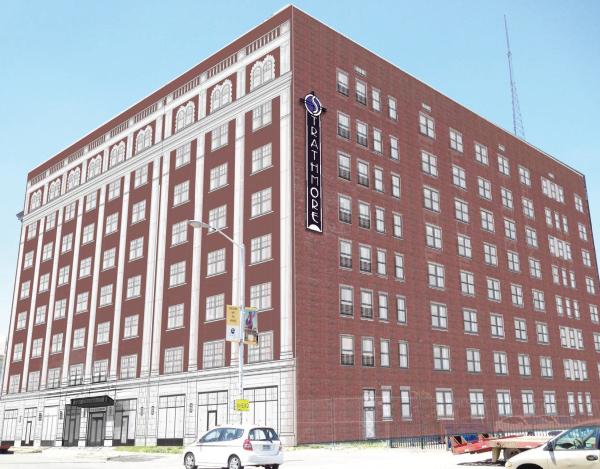 DETROIT, MI - It has been 11 years since the Strathmore Hotel located on West Alexandrine in Midtown Detroit closed, but in approximately 18 months it will reopen as a residential building offering affordable and market-rate rental units to Detroiters.

During a ceremony today outside the historic 8-story building, Detroit Mayor Mike Duggan, Midtown Detroit, Inc. (MDI) and their partners announced that funding has been finalized for the $28 million project and that reconstruction on the 129 apartments and 2,000 square-feet of ground-floor commercial space will begin in the next 30 days – once the environmental remediation, which is currently underway, is complete. A rendering of the new Strathmore was also released.

"The redevelopment of a building as significant as the Strathmore is a great boost for Detroit no matter how you look at it," Mayor Duggan said. "Our development team chose to get behind this project because it fits perfectly into our commitment to provide Detroiters the opportunity to live in any neighborhood in the city they want. With its significant number of affordable housing units, the Strathmore helps to make even a hot property like Midtown accessible to an average Detroit resident."

"The Strathmore is an exciting and significant housing development for Midtown, and we are incredibly grateful for our partners who have worked tirelessly to get this project over the finish line," said Sue Mosey, President of Midtown Detroit, Inc.

Detroit-based Hamilton Anderson Associates has been hired as the project architect. The apartments they are designing will include one and two bedroom units. Individuals interested in becoming a tenant of the future Strathmore Apartments may call Midtown Detroit, Inc. at 313-420-6000 for preleasing information.

"Creating vibrant, sustainable and unique places where talent, entrepreneurs, and businesses want to locate, invest, and grow is a critical building block in a strong economic foundation," Morante said. "This project will bring new vitality to Midtown and serve as a catalyst for additional economic growth."

"McCormack Baron Salazar is pleased to be a partner with Midtown Detroit, Inc. in the redevelopment of the historic Strathmore hotel.  MBS, after more than 25 years of attempting to work with Susan Mosey and MDI, has succeeded in moving forward with our first project together.  We look forward to working in Detroit for many years to come," said Richard Baron, Chairman and CEO of McCormack Baron Salazar.

"U.S. Bank is proud to partner with Midtown Detroit and McCormack Baron Salazar on this amazing project that will provide safe, high-quality housing for the residents of Midtown and surrounding communities," Abhisek Mitra, assistant vice president of U.S. Bancorp Community Development Corporation, said. "We are happy to help finance housing that will support the continued growth and revitalization of Detroit."

Originally built in 1924, the historic 8-story Strathmore Hotel is located at 70 West Alexandrine in Midtown Detroit and the Willis-Selden Historic District, representing one of the largest concentrations of architecturally significant, late 19th and early 20th century buildings of mixed uses existing in Detroit.