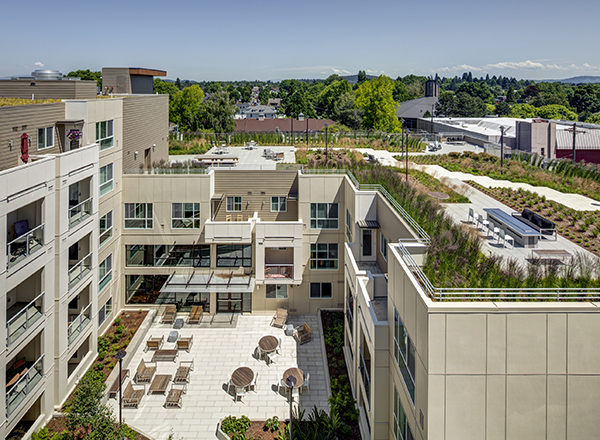 IRVINE, CA - Installing energy efficient appliances and cool roofs and using low-VOC paint and finishes are pretty commonplace these days; but what are some of the sustainable design strategies that can be implemented that takes your next project to a new level?  Ben Kasdan, AIA, LEED AP and senior designer with KTGY Group, Inc., an award-winning national architecture and planning firm says that there are several largely underrated strategies that will make a positive impact on the sustainability of a building and especially in the wellness of the users.

Kasdan believes that the key is walkability. "Shockingly, most of the green certification systems basically ignore this aspect of sustainability," says Kasdan. "Sustainability for a particular project is typically calculated in a vacuum without much consideration of the building’s true context. But the effectiveness of a building’s sustainable strategies is tied closely to its site and a big component of how a building relates to a site is whether or not it is located within walking distance to schools, restaurants, retail, services, and/or places of employment."

Kasdan adds that being able to walk safely, conveniently, and efficiently should be an integral aspect of any good design. "Too often, site planning efforts become dominated by the automobile when instead they should primarily focus on the pedestrian," Kasdan says. "Study after study show the health benefits of walking and therefore if the cities and developers made a more concerted effort to encourage walking via design, then imagine the health benefits that could be achieved within those communities."

Kasdan finds that serious cyclists will just keep their bicycles in their apartment as they are too valuable to be crammed in with all of the other bikes in the community. He feels that site plans should find a way to incorporate safe, convenient, and efficient bicycle paths – and not just along the street by the gutters separated from automobiles by a painted line. "The healthy choice to ride a bicycle should not require putting one’s life at risk, as is often the case," Kasdan states. He notes that in addition to providing bicycle storage, some developers are adding a bicycle repair shop as a popular amenity in new apartment communities.

Other design strategies include adding urban farming opportunities and effective shading devices."Adding awnings, canopies, and 'eye-brow' elements should be more than just aesthetic," Kasdan says. "It goes back to proper solar orientation in the site planning stage, but effective solar shading can reduce mechanical and electrical loads on a building significantly, in addition to merely improving the quality of interior spaces. Architects can use simple rules of thumb to provide devices that correctly block solar intrusion into interior spaces whenever possible. Plus, they have the added bonus of improving the visual quality of a building, as well."

Popular with residents living in apartment communities and a replacement for those that have moved from single-family homes, is a resident garden. However, Kasdan notes that they have found that relying on residents to maintain community gardens on their own can become problematic, but by including the gardens as part of the apartment community's landscape maintenance plan, they can preserve their aesthetic and productive qualities more successfully.

"Besides being a useful amenity for residents who may wish to grow their own food and an effective  bullet-point in a marketing brochure, there are significant educational benefits for exposing children to the process of growing, harvesting, and eating their own food," says Kasdan. "Kids love to play in gardens, and studies have shown that participating in growing healthy food correlates directly with children making healthier choices in their eating habits."

Another sustainable design strategy is focused on water conservation, a very hot topic in many parts of the country. Kasdan believes that high-efficiency plumbing fixtures – such as waterless urinals, dual-flush toilets, and water-efficient faucets – need to become standard across all segments of the construction industry. "On-site storm water treatment and storage have become a part of contemporary development, but re-using the captured storm water (where applicable) for on-site irrigation and/or water closets have not caught on as a typical practice. Likewise, the on-site treatment of re-use of greywater generated from sinks for on-site irrigation has not made its way into typical practice either," says Kasdan.

Kasdan notes that as it takes water to heat and cool buildings, improving the overall energy efficiency of a building will also decrease its water usage. Also, proper solar orientation, effective shading devices, cool roofs, and efficient mechanical and electrical systems can play a role in conserving water as well.