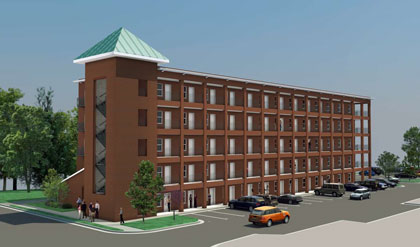 WINSTON-SALEM, NC - The Modular Building Institute is pleased to announce the Modular Building of the Month for December 2014 is Champion Commercial Structures’ Hilltop House. Hilltop House is a five-story apartment complex built in downtown Winston-Salem, North Carolina designed to appeal to the area’s young professional population.

Modular construction was chosen for this urban project because of the very tight schedule and demanding site conditions. In the middle of downtown, workspace was at a minimum and the smallest amount of disturbance to the surroundings was also important for neighboring businesses and homes. The first floor was site-constructed with careful coordination between Champion and the general contractor. Champion provided matching finish materials for the site-constructed areas, making the modular and site-built portions of the building indistinguishable.

Construction of this 65-unit complex only took 47 days – 36 days in the factory, with 11 days for setting the modules on-site. Occupancy occurred six months later. This fast-tracked project owes its punctual completion to the level of finish of the modules when they were delivered. All that was needed after being set and sealed was a final coat of paint. Apartment fixtures include energy efficient HVAC systems, energy-saving light fixtures, water-saving plumbing fixtures, Energy Star appliances, and energy-efficient insulation.

“With an unprecedented number of millennials joining the workforce, the multifamily housing market is poised for strong growth in the upcoming year. Modular construction is ideal for this market as it shortens the overall construction schedule allowing for earlier occupancy and quicker return on investment,” says MBI Executive Director Tom Hardiman.

In addition to being recognized as MBI’s December 2014 Building of the Month, Hilltop House also won the 2014 NAHB Award for Modular Multi-Family Home Design, and was featured in the November 2014 issue of North Carolina Construction News.