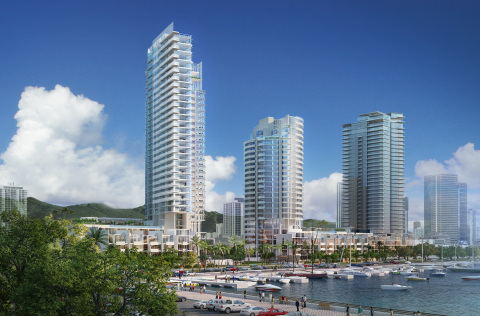 HONOLULU, HI - The Howard Hughes Corporation announced the next milestone in the transformation of Ward Village. The company has received approval from the Hawaii Community Development Authority for Ward Village Gateway, the first residential and commercial development in Phase Two of the Ward Village Master Plan, a 60-acre master planned community located in the Kaka‘ako district of Honolulu. Ward Village Gateway will include a public park and two mixed-use towers with approximately 236 total residences and 20,000 square feet of retail.

“Ward Village Gateway further cements our vision to create a world-recognized vertical master planned community offering an unrivaled urban lifestyle in the heart of Honolulu,” said David R. Weinreb, Chief Executive Officer of The Howard Hughes Corporation. “Along with the additional residences, the introduction of the park will continue to transform Ward Village into an integrated, sustainable neighborhood that provides a gathering place for all of Honolulu.”

Ward Village is located in Honolulu between the city’s downtown and Waikiki. The coastal community is being meticulously curated into a vibrant neighborhood with plans for over 4,000 exceptional high-rise residences and more than one million square feet of retail and commercial space surrounded by outdoor public gathering places and pedestrian-friendly streets. The neighborhood will be anchored by the Village Green, a public park that will also serve as a multi-purpose gathering space in Honolulu where residents and visitors will convene, socialize and enjoy an array of community events.

The Howard Hughes Corporation first announced its vision for Ward Village in late 2012, with a plan to create a dynamic neighborhood offering an urban lifestyle. The development will feature an urban residential neighborhood surrounded by community open spaces and pedestrian friendly streets, creating an energetic environment to encourage walking and biking. Inspired by the rich history of the land, the vision also incorporates strong principles of sustainability and cultural respect across the 9.3 million square foot mixed use development. In 2013, Ward Village received LEED® Neighborhood Development (LEED-ND) Platinum certification, making it the largest LEED-ND Platinum-certified project in the nation and the only such project in the state of Hawai‘i.

Ward Village Gateway will be designed by internationally recognized architects Richard Meier & Partners in collaboration with executive architect, Architects Hawaii, and a team of local consultants. The development includes the one-acre Village Green that will serve as the start of a planned four-acre park that will open up a pedestrian connection from the heart of Ward Village to the center of Kewalo Basin Harbor. The Village Green will include water elements flowing towards the ocean, public seating, native plants and walking pathways. Ward Village Gateway is part of Phase Two of the Ward Village Master Plan, which also includes a flagship 50,000-square-foot Whole Foods Market and additional retail space.