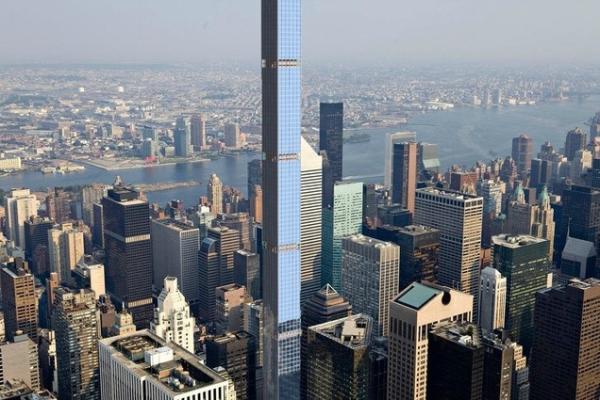 NEW YORK, NY - CIM Group and Macklowe Properties announced the topping out of the iconic 432 Park Avenue at 1,396 feet.  The tower has risen and taken its place among and above the icons of the Manhattan skyline, surpassing the Empire State Building (1,250') and Chrysler Building (1,046') in height, and becoming the highest rooftop in New York City.  432 Park Avenue offers residences with unrivaled views of New York City, from Central Park to the Atlantic Ocean and Lower Manhattan to Connecticut.  432 Park Avenue will welcome its first residents next year.

Designed by celebrated architect Rafael Vinoly, the soaring and graceful tower is a perfect square of architectural concrete featuring oversized 10-foot-by-10-foot windows that flood the residences with natural light and frame the unsurpassed views.  The tower houses an exclusive offering of 104 luxury condominium residences that begin 356' above the ground.  In addition to expansive layouts, the residences – designed by Deborah Berke – boast extraordinarily tall 12.5-foot finished ceiling heights, solid oak flooring, Italian marble countertops and the finest interior finishes and appliances.

"The topping out of 432 Park Avenue ahead of schedule is a testament to the efforts of CIM's internal investment and development resources and the talented project team assembled to reach this important milestone toward the completion of 432 Park Avenue," said Avi Shemesh, Principal and Co-Founder of CIM Group.

Harry Macklowe, Chairman of Macklowe Properties, said, "We are proud to have created a New York City landmark that can be seen throughout all five boroughs, and which will enhance our city's iconic skyline. At 1,396 feet, 432 Park Avenue is the tallest residential building in the Western Hemisphere, and represents an extraordinary accomplishment of architecture, design, engineering and craftsmanship. In this second decade of the 21st century, we are privileged to have been part of creating something that will join the pantheon of legendary 20th century structures like the Chrysler, the Empire State and the Woolworth Buildings."

Construction is being overseen by general contractor Lend Lease.  To date, over 6,500 trucks of concrete have been delivered to the site, where the skilled workforce has placed over 70,000 cubic yards of concrete and 12,500 tons of rebar.

"We're very proud to celebrate the topping out of this world-class project that has reshaped the New York City skyline," said Anthony Mannion, Principal-in-Charge, Lend Lease LMB, Inc.  "I want to acknowledge the combined efforts of CIM Group, Macklowe Properties, our design and construction partners and the Lend Lease project team for reaching this important project milestone, and especially thank the trades people who have worked tirelessly to get us to this point."