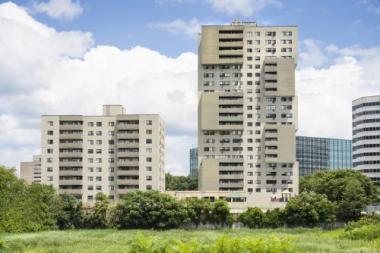 STAMFORD, CT - U.S. Congressman Jim Himes was the master of ceremonies for a ribbon cutting ceremony at Bayview Towers Apartments in Stamford to formally announce the completion of a $13 million of renovation of the 200-unit affordable housing complex.

The Connecticut Housing Finance Authority provided a $17,750,000 loan to facilitate the acquisition and renovation of the property to preserve the units as low and moderate income housing. PNC Bank served as the federal low-income housing tax credit investor for Bayview, providing $7.0 million in equity.  The U.S. Department of Housing and Urban Development provides rental assistance to a number of residents at Bayview Towers, making the rents affordable to lower income families.  Connecticut Light and Power supported the project by making a $500,000 contribution through the State of Connecticut's Housing Tax Credit Contribution program to assist with the rehabilitation of the project, and the City of Stamford agreed to continue to provide a partial property tax abatement grant through a State of Connecticut funded program.  All of these participants helped make the project possible.

According to Richard Burns, CEO of NHPF, "We at The NHP Foundation are very proud of this significant renovation of Bayview Towers and appreciate the contribution of our public and private partners in the project.  NHPF has an expanding and valuable role to play in strengthening the affordable housing field in this country.  The Bayview Towers renovation exemplifies our vision for the long-term preservation of affordable housing in high cost markets."

Bayview Towers was built in 1973 and is located at 300 Tresser Boulevard in Stamford. The 200 unit complex is composed of a 21-story and a 9-story high-rise building.  The renovations included the installation of new flooring, new kitchen cabinets, counters and fixtures, new tubs and shower surrounds, new vanities, and medicine cabinets, as well as energy efficient lighting and appliances.  Capital renovations also included replacement of the domestic and sanitary plumbing lines, electrical upgrades, elevator improvements, all new windows, facade improvements and new roofs.

"Bayview Towers Apartments fulfills a critical need for affordable family housing in Stamford. We were pleased to work with NHPF on making a number of major capital improvements to Bayview Towers that will meaningfully extend the useful life of a critical affordable housing asset in Stamford," said Eric Chatman, President and Executive Director of CHFA.