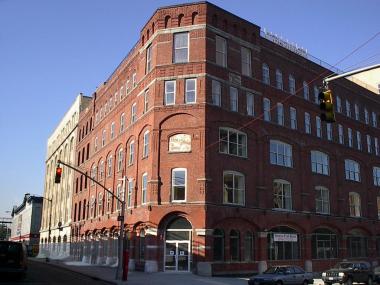 The iconic property, otherwise known as "The Chocolate Factory," consists of seven contiguous buildings and features 123 loft apartments, ground-floor retail and parking. Amenities include a doorman and roof deck with breathtaking views of Brooklyn and the Manhattan skyline.

Converted in 2002, this building offers many different floor plans of versatile lofts. Additionally, the property serves vital neighborhood needs, with more than 25,000 square feet of retail along Park, Washington, and Waverly Avenues, including the neighborhood's only organic market, and a luxury spa.

The original Romanesque Revival building was designed by the Parfitt Brothers in the late 19th century. It was built for the Von Glahn Brothers, a wholesale grocer that received produce from Wallabout Market. It was soon thereafter purchased by Rockwood & Company Chocolate, which for decades was one of the largest candy makers in the country. After World War II, Rockwood closed, and Sweets Corporation of America purchased the factory until closing permanently in 1967.

HK Organization has been active in the neighborhood for many years and was attracted by the opportunity to acquire a unique asset in a choice location within the burgeoning Brooklyn Tech Triangle. Local HK developments include Empire Stores, the conversion of the historic coffee warehouses into office, retail, and restaurant space on the DUMBO waterfront, and 99 Gold Street, the conversion of a toy factory into luxury rental apartments in Vinegar Hill. To date, HK Organization now has in excess of one million square feet in the Brooklyn Tech Triangle and Downtown Brooklyn Waterfront.