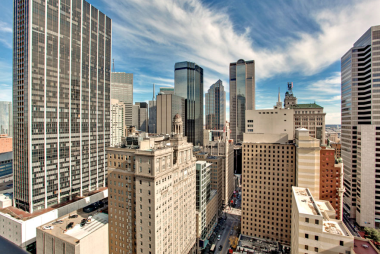 DALLAS, TX - TDI, a leader in the development of Class A multi-family housing, has begun construction in a joint venture with Matthews Southwest, a Dallas based international development company.  The development at 1210 South Lamar will house 290 luxury apartment homes in the South Side neighborhood and is scheduled for completion by the beginning of 2016.

The site is located at the intersection of South Lamar and Powhattan Street, in close proximity to South Side on Lamar, NYLO Dallas South Side, The Beat Lofts, Gilley's Dallas, South Side Ballroom and the Belleview apartments. There are numerous restaurants within walking distance including Full Circle Tavern, The Cedars Social and Opening Bell. Residents can also walk to the DART light rail at Cedars Station connecting them to entertainment and business venues such as the Dallas Convention Center, American Airlines Center, Victory Park and Mockingbird Station.

"The commitment of Matthews Southwest and TDI to develop additional creative and quality residential projects for the urban core of our city is a real gift," Mayor Mike Rawlings said. "The team is giving us great examples of how to continue to develop The Cedars neighborhood and offer various housing options for citizens who want to live near downtown. This project represents another GrowSouth moment worth celebrating."

"We are looking forward to working with Jack Matthews," said Matt Brendel, Vice President and Development Partner for the Central Region at TDI. "He has been a great partner and the project wouldn't have moved forward without his leadership. We also want to thank both the city and county officials for their support."

The development will include one and two bedrooms, and live/work residences and efficiencies, with an eclectic blend of contemporary, industrial and traditional facade designs in a four story midrise building. Balconies or patios are provided for all types of residences.  High ceilings are featured in all of the residences as well as kitchen islands, stainless steel appliances and full sized washers and dryers.

"We are especially excited about the live/work residences," said Brendel. "They will be located along South Lamar Street and are intended for artists or small service business that can benefit from the pedestrian traffic along South Lamar."

"This is going to be a great addition to the South Side neighborhood," said Jack Matthews, President of Matthews Southwest. "We are looking forward to our continued work with TDI and are excited about expanding the retail/entertainment on South Lamar."

The property is planned to have two private courtyards, one with a pool and direct access to the property's clubhouse. The second will feature a park like setting with benches and an outdoor movie theater.  The property will also have a rooftop deck with views of the Dallas skyline, a trail connecting to DART and access to The South Side Bark Park.

Financing was provided by American Bank of Texas and the Dallas Police & Fire Pension System.