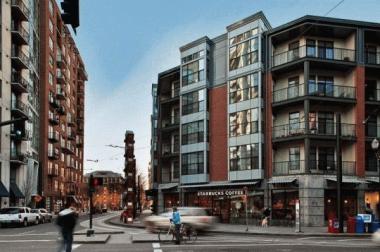 PORTLAND, OR - Dozens of workers, elected officials, and community leaders gathered in Portland to honor Workers' Memorial Day (April 28th) for a ceremonial groundbreaking of Lloyd District Commons, a new construction investment by the AFL-CIO Building Investment Trust. Workers' Memorial Day events were held across the country to remember those who have suffered and died on the job, and to renew efforts for safe workplaces.

The groundbreaking ceremony was for a new $43.2 million multifamily project at 330 Multnomah Street in Portland, OR, that will create hundreds of construction, service, and maintenance jobs performed by highly trained and expert union workers. The property will consist of a six-story, mid-rise structure containing 186 rental apartments and 190 parking spaces. Construction is expected to be completed in July 2015.

Lloyd District Commons is adjacent to the Convention Center and near the Rose Garden Arena and the Lloyd Center Mall. The property will also feature approximately 3,500 square feet of street-level retail space. A lease has already been executed with Starbucks (who previously operated a drive-thru store on the site) for 1,850 square feet of the retail space.

The BIT has ten projects currently in development across the country. Total development costs for these projects is approximately $1.1 billion, and they are expected to create some 5,500 union jobs throughout the course of construction.

Over the BIT's 25-year history, the fund has invested more than $5.3 billion for the development and acquisition of more than 180 retail, office, multifamily, hotel, warehouse, and mixed-use properties across the country.