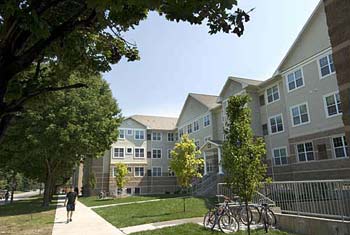 "The economic and housing outlook in Michigan for 2014 is decidedly brighter than what we've seen at any time over the previous five years," MSHDA Executive Director Scott Woosley said during the opening of the three-day conference at the Lansing Center in downtown Lansing.

"The state's housing industry is helping to spur Michigan's economic turnaround," Woosley said. "Consumer demand is getting stronger and consumer confidence is returning to prerecession levels. We're anticipating robust need for new housing construction throughout much of the state as we enter the building season."

MSHDA teamed with the Home Builders Association of Michigan and the Michigan Association of Realtors to develop its 2014 housing industry assessment. Highlights of MSHDA's findings include:

Michigan will see a nearly 20 percent increase in new single-family housing starts in 2014 over last year, following a 30 percent increase in 2013 over 2012. Builders are scheduled to begin construction on 16,000 homes this year across Michigan, the highest total since May 2008. Estimates also suggest Michigan will see nearly 30,000 new housing starts by the end of 2016 (single and multi-family units combined).

Home sale total prices will show gains in 2014. First-quarter average sales price this year is up nearly 10 percent, and local Realtor associations across the state are reporting increases as high as 27.6 percent. March was the 24th consecutive month with an increase in Michigan's average sales price.

Average prices are forecast to carry the strong growth momentum in the past 12 months. On a year-over-year basis, these gains will range from 3 percent to 15.5 percent for Michigan. In 2013, total sales volume in Michigan reached its highest point since 2006, as the average sales price rose nearly 13 percent.

Despite the state's excruciating winter weather, Realtors report an uptick in foot traffic at open houses as potential buyers recognize that a 4.5 percent mortgage is still a bargain.

In many areas of Michigan, housing inventory levels have decreased to five months or less from levels as high as 17 months, encouraging wary sellers to step into the market.

First-quarter Realtor membership, a reflection of new job creation and heightened demand for sales staff, is at its highest level since 2009, seven percent higher than March 2013.

Foreclosures will continue to drop in Michigan.  According to data from RealtyTrac, foreclosure activity in Michigan has dropped from 4,800 filings in April 2013 to 2,900 filings in March 2014.  This trend is directly attributable to the work being done through MSHDA's Step Forward Michigan program and its lending partners, nonprofits and the federal assistance programs available to aid struggling homeowners at risk of foreclosure.

"Michigan's residential housing market is pointed toward a sustained period of growth that we believe will extend well into the future," Woosley said. "The challenge we face is whether the building sector is going to be able to meet growing demand from buyers given the workforce and capital access issues the industry will face in many markets throughout the state."

The Building Michigan Communities Conference, which annually draws more than 1,700 attendees, is among the largest events of its kind in the country. Service providers, nonprofit and for-profit developers and financiers who are focused on improving Michigan's communities are among those who attend the conference.