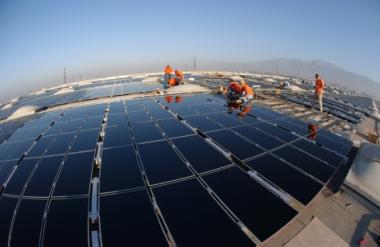 LOS ANGELES, CA - A significantly expanded commercial rooftop solar program in Los Angeles would create thousands of new jobs and spur hundreds of millions of dollars in new investment, with particular benefit to residents living in traditionally underserved neighborhoods in Los Angeles, according to a joint USC/UCLA study conducted on behalf of the Los Angeles Business Council Institute.

The report, Sharing Solar's Promise: Harnessing LA's FIT to Create Jobs and Build Social Equity, calls for the LADWP's current feed-in-tariff (FIT) program, also known as CLEAN LA Solar, to be expanded from 100 to 600 megawatts, and to include incentives for solar developers and property owners to focus much of that growth in low-income communities where solar potential is among the most promising in the city. Incentives should also be provided to companies hiring disadvantaged workers for the installation of the solar systems, according to the report.

The CLEAN LA Solar program allows local commercial property owners to sell solar power generated from rooftops and parking lots back to LADWP at a competitive fixed rate. The report finds that expanding the program to 600 megawatts will help Los Angeles achieve a state mandate to generate a third of its energy from renewable resources by 2020.

Prior studies commissioned by the LABC Institute have concluded that Los Angeles has 10,000 acres of rooftop solar potential, enough to support a FIT far larger than the 600 megawatt program recommended in the study released today from the USC Program for Environmental and Regional Equity (PERE) and the UCLA Luskin Center for Innovation. And according to the report, over 40 percent of the current CLEAN LA Solar project applications are located in Los Angeles' solar equity "hot spots," or neighborhoods with abundant rooftop space for solar installations and also in need of significant socioeconomic and environmental investment. Areas identified as "hot spots" include the San Fernando Valley, Downtown Los Angeles and the region surrounding the Port of Los Angeles.

"It's very encouraging to see that FIT applications are rolling in from across the city, particularly low-income neighborhoods where the environmental and economic benefits are so important," said Dr. Manuel Pastor, Director of the USC PERE and one of the report's authors. "Significant growth of the CLEAN LA Solar program is absolutely achievable, which is why we were so encouraged by Mayor Garcetti's expression of support in his budget message for expanding in-basin solar generation to 600 megawatts," he added.

"The CLEAN LA Solar FIT program is paving the way to secure our city's future as a statewide and national leader in solar production, helping our environment and economy alike," Mayor Garcetti said. "I applaud this program's successful efforts to direct our abundant supply of sunshine to support local business and workforce development while reducing our carbon footprint."

The Sharing Solar's Promise report also identifies areas of potential improvement to the LADWP program, and makes several recommendations designed to ensure that Los Angeles' diverse workforce is an equal participant in and beneficiary of the FIT.  Scaling the program from its current 100-megawatt capacity to 600 megawatts would add stability to the program and increase its potential environmental and economic benefits, researchers concluded.

The report proposes streamlining the FIT application process where possible, in particular moving the permitting process online for commercial, industrial and multifamily rooftop solar projects— which together comprise 69 percent of LA County's solar potential. It also outlines strategies to expedite the processing of smaller commercial projects, which tend to have greater local economic development and job creation benefits for the local community.

"CLEAN LA Solar installations are already providing clean and sustainable power to communities across the city, from North Hollywood to Downtown Los Angeles to Chatsworth," said Councilmember Paul Krekorian. "As the FIT continues to expand, it's important that the process be streamlined and simplified as much as possible, particularly for the applicants that commit to hiring local developers and disadvantaged workers."

California Governor Jerry Brown believes incentives through efforts that include California's Property Assessed Clean Energy (PACE) program are important to driving continued solar energy development in the state's urban areas. "PACE enables homeowners to buy solar panels, install low-flow toilets and make other smart investments that save energy and water without breaking the bank," he said. "As California confronts a severe drought and a rapidly changing climate, this program gives homeowners another opportunity to do their part."

According to Sharing Solar's Promise, California leads the nation in solar job creation with over 47,000 workers, accounting for about one-third of the nation's total solar industry employment. And across the state itself, job growth in the solar sector (8.1%) outpaced overall job growth (1.7%) in the past year, a trend that is expected to continue.

"Rooftop solar on commercial buildings is a critical piece of Los Angeles' economic development strategy which is why we've worked so hard to see the FIT realized," said LABC President Mary Leslie. "Our CLEAN LA Coalition, including the Sierra Club and leading business, civic and other environmental and community-based organizations, is confident that an expanded FIT will place Los Angeles at the forefront of the clean energy movement in urban America, while spurring long-term economic benefits locally."

LABC Chairman Jacob Lipa was enthusiastic about the study's positive outlook on the FIT for workers and businesses alike. "It's clear that the FIT is successfully creating a strong foundation for a thriving in-basin solar industry, while also stimulating local job growth and generating economic opportunity for the neighborhoods that need it the most," he said. "Los Angeles has truly set a model for the rest of the country to follow, and we look forward to a bright future for this smart program that is simultaneously bringing in direct investment to the city and decreasing our impact on the environment."