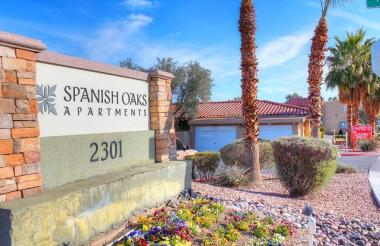 LAS VEGAS, NV - The ConAm Group of Companies, a full-service real estate management and investment firm specializing in multifamily housing, announced the acquisition of the Meadow Ridge and Spanish Oaks apartment communities in Las Vegas. ConAm completed the transaction in partnership with a subsidiary of a fund managed by Oaktree Capital Management, L.P. that purchased the notes on the properties before taking ownership.

“We are pleased to acquire these two Las Vegas apartment communities at an attractive price,” said Chaz Mueller, ConAm’s president and chief executive officer. “In addition, we are excited about establishing a new relationship with a highly-respected investor like Oaktree, and we look forward to working with them again on future transactions.”

The new owners will invest in upgrades and make capital improvements to the well-located communities. Meadow Ridge (232 units) and Spanish Oaks (216 units) are both within minutes of the Las Vegas Strip and I-15, which offers easy access to McCarran International Airport and the city’s major employment centers.

Las Vegas is one of ConAm’s largest markets, where the company manages almost 7,000 units in 27 apartment communities. The company has owned and managed apartments in the Las Vegas market for more than 30 years.

The ConAm Group of Companies is a full-service real estate management and investment firm specializing in multifamily housing. Based in San Diego, California, the firm is active in the development, acquisition and rehabilitation of apartment communities.  ConAm oversees a nationwide portfolio of approximately 50,000 fee-managed and company-owned apartments.

Oaktree Capital Management, L.P. is a leader among global investment managers specializing in alternative investments, with $83.6 billion in assets under management as of December 31, 2013. Headquartered in Los Angeles, the firm has over 800 employees and offices in 16 cities worldwide.