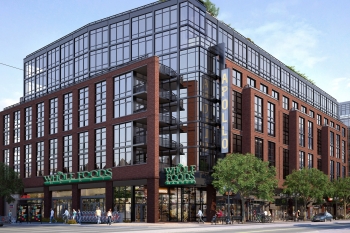 ARLINGTON, VA - Arlington, Virginia-based multifamily developer Insight Property Group announced that it has acquired the H Street Self-Storage Property in Washington, DC for its new urban, mixed-use luxury project, The Apollo on H Street. The Apollo will include a Whole Foods Market and state of the art amenities including a green roof with Capitol views.

Insight plans to start construction of the $185 million project in the fall of 2014. The project will be fully finished and delivered in early 2017. The acquisition of the Self-Storage Property follows Insight’s 2011 purchase of the adjacent Murry’s Grocery Store site. Together, the properties total 2.32 acres and provide 460 feet of H Street frontage between 6th and 7th Streets in NE Washington, DC.

In July 2013, Insight obtained PUD approval for this to-be-built mixed-use project including 430 luxury residential units and 75,000 square feet of retail space. The Project’s retail will be anchored by a Whole Foods Market. Initial delivery of space is expected to occur in late 2016. Project completion should occur in 2017.

“The acquisition by Insight of the Self-Storage Property represents the final piece of property needed to move this extraordinary development forward,” says Insight President Michael Blum. According to Blum, this development will serve to connect the entire H Street NE corridor from Union Station to the west to the Atlas District to the east. “We’re proud to be associated with this project. We expect it will become an exciting urban destination,” added Insight Principal Richard Hausler.

According to Trent Smith, Insight’s Development Partner, “These two H Street acquisitions and last year’s PUD approval build on our three years of collaboration with the City and local ANCs, as well as area residents and businesses.” Now, he said, “We are about to deliver on our commitments.”

The H Street acquisition is part of Insight’s growing presence in the DC-area multifamily and mixed-use development market. Insight recently completed its Grayson Flats apartment project in Arlington, VA. Other current Insight development projects include a 310-unit luxury apartment project under construction in Silver Spring, Maryland, a 240-unit luxury apartment project currently under construction in the Alexandria section of Fairfax County Virginia, both set for completion in summer 2014; and the re-development of the Metro Rosslyn Apartments in Arlington, Virginia. The company has also acquired 572 existing apartments in four Metro DC-area locations.