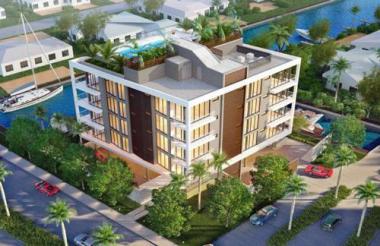 In September 2013, Roy approached the Broward Bank of Commerce team to secure lending to purchase two parcels (one totaling approximately 31,200 SF and the other approximately 15,418 SF) in Fort Lauderdale's affluent Las Olas Isles Neighborhood on the eastern end of Las Olas Boulevard. The loans were approved and funded shortly thereafter.  There are 3 projects ongoing, Aquavita on Hendricks Isle, Aqualuna on Isle of Venice and the third site, 1800 Las Olas, which currently serves as the sales center for all the projects.

"There are a lot of exciting growth opportunities happening in downtown Fort Lauderdale right now," states Keith Costello, CEO of Broward Bank of Commerce. "As a community bank with deep roots in Fort Lauderdale, we are a natural partner for quality developers who have a proven track record and resources to put together viable projects such as Mr. Roy has done."

The loans and investments the bank offers developers as well as mortgages for new construction condominiums are part of BBOC's ongoing efforts to provide Las Olas, as well as other South Florida communities, with innovative products and services designed to support economic growth.

"South Florida is showing signs of both a housing recovery and a strengthening economy," states Costello. "Our focus of supporting the communities we serve is central to our work as a bank, and we're proud to be a part of this community's development."