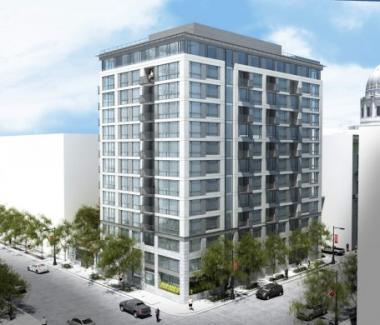 The HIT investment of union and public employee pension funds will help finance the thirteen-story building offering 162 housing units with underground parking. To help the city address its shortage of affordable housing, 19 of the units at 101 Polk will be affordable to residents earning up to 55% of the area median income.

The project site is adjacent to the city's Civic Center in the Central Market neighborhood, an area that is undergoing significant revitalization to create a vibrant urban environment that takes advantage of its transit-rich location and many cultural amenities.

"San Francisco is a very strong market for multifamily investment, and the HIT is pleased to be participating in 101 Polk," said HIT Executive Vice President and Chief Investment Officer Stephanie H. Wiggins. "The project supports the city's goal of revitalizing Central Market by providing much-needed residential development that is affordable to people of all income levels."  She adds that the HIT's investment also represents "our continuing commitment to organized labor, creating good jobs for members of the local building and construction trades unions."

HIT Chief Operating Officer Ted Chandler said the project's design should meet or exceed state requirements for environmental sustainability.  "101 Polk will be a great addition to the Central Market neighborhood for many reasons, including its sustainable and green features," said Chandler, adding that the project is designed to meet California's GreenPoint Program requirements. In fact, Chandler said it is expected to exceed the California Energy Commission's Title 24 requirements, which promote greater energy efficiency.

"The union community welcomes the HIT's investment in 101 Polk," said Michael Theriault, Secretary-Treasurer of the San Francisco Building and Construction Trades Council. "We know the HIT will make sure all the work is done union. That means more family-supporting union jobs for our members and more high quality union-built development for the community."

101 Polk is the HIT's latest investment with Red Mortgage Capital, LLC, and the Emerald Fund, the project developer. Most recently, the HIT worked with these two groups to provide financing for the $105 million Rincon Green @ 333 Harrison apartments in San Francisco's Rincon Hill neighborhood.

The HIT has invested more than $285 million in San Francisco, building 1,780 units of housing and bringing over half a billion dollars of development to the city.  HIT-financed projects represent more than 2,800 jobs for members of the local building and construction trades unions.  The hundreds of union workers to be employed on the 101 Polk project are helping the HIT reach its goal of creating 25,000 union construction jobs by 2015 through its national Construction Jobs Initiative. Nearly 18,500 union construction jobs have been generated since 2009 under the initiative.